There are some birds that spend almost all year at sea, and come to shore only to breed. Those species, like albatrosses or penguins, often gather in large and spectacular colonies, and since they barely see humans, they are fairly easy to approach. I have fond memories of the Sept-Îles in Brittany, or Låtrabjarg in Iceland.

Hornøya is also one of those magical places where pelagic birds gather.

Out of Vardø lies this big rock that offers shelter to 100 000 birds from up to 11 species. From the town, the view is already quite impressive, but as you approach by boat, only then you understand what 100 000 birds really means. 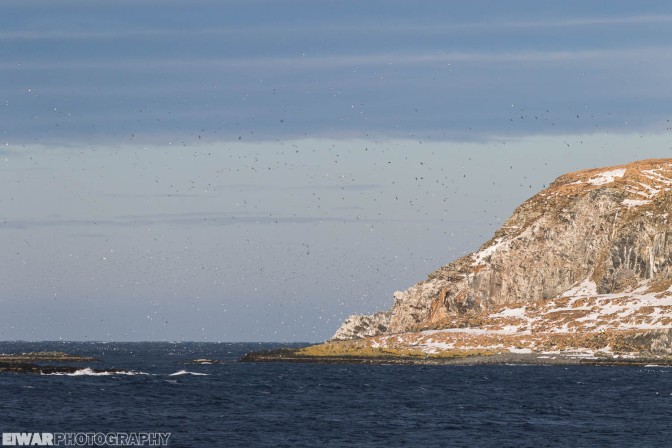 First you have to cross a sea of Atlantic puffins (Fratercula arctica) and Common guillemots (Uria aalge), where the birds fly away or dive only when you get very close. Then, as you land, you look up, and you see this cliff above you, where every inch of flat rock (and many inches of non-flat rock as well) is occupied by a nesting creature. Imagine the noise! 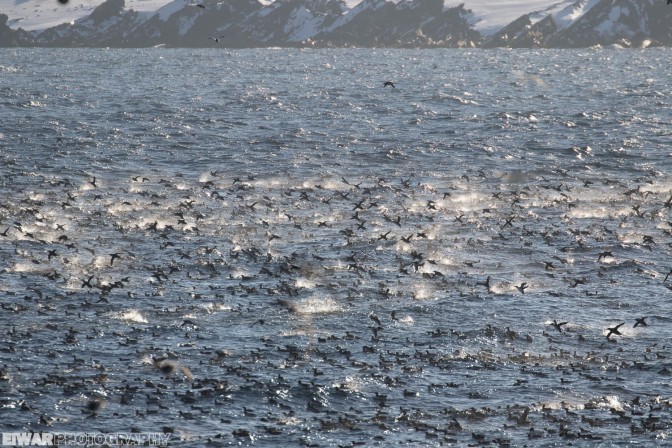 We spent 6 hours on the island, on a very sunny day. Physically, it was demanding, as we basically shot non-stop. The camera, plus the tripod, that’s a heavy load to carry around, especially when you have to find your way along narrow rocky and icy paths. That said, I was happy to have the tripod. I remember asking some advice on a forum on how to choose one, and one of those guys who always know better than you just said, “bah, your setup is so lightweight, I wouldn’t even bother with a tripod”. Nope, that didn’t answer the question, and how good an idea not to follow his advice! It was great to have the possibility to shoot without holding the gear. Remember also that my arm was still hurting from the morning hide in Båtsfjord!

From the landing pier, the path led us to the south, right under the cliff, then up on the island’s shoulder, among the birds. The proximity was a delight, and look how fluffy those puffins are!

On the islands, there are also gulls nesting, including Black-legged kittiwakes (Rissa tridactyla) in the lower part of the cliff and Herring gulls (Larus argentatus) on flatter land. Marci also found his favourite bird so far, the European shag (Phalacrocorax aristotelis), or as they call it in Hungarian, Üstökös kárókatona… yes, that’s a weird language (but fascinating!) 😀

I’m globally not very happy with my pictures, because, no matter how sharp they are, the boring, flat daylight is a real bummer. We wished to sleep on Hornøya, in the lighthouse, but the BBC was filming a documentary on the island, and there was no bed available for us. Therefore, we had to stick to a daytrip, and were there from 9 to 15. For instance, I have trouble fixing the blues in the sky.

In any case, I will keep incredible memories of these moments so close to the birds.

I hoped to see a Gyrfalcon (Falco rusticolus) or a White-tailed eagle (Haliaeetus albicilla) hunting in the cliff, and was particularly watchful when a ruckus erupted in the colony, but couldn’t spot any. I saw many Common ravens (Corvus corax) though, maybe ten roaming around, teased by the gulls in flight or climbing the cliffs in quest for a weak alcid that wouldn’t fly on time. From what I witnessed, they weren’t very successful, but I’m sure the story is different later on, when eggs have hatched.

After a few hours, we switched our lenses, and I could try Marci’s 70-200mm. It’s much smaller than my 100-400mm, and since it’s not stabilized, it’s even more lighter. Thus, it feels really different. I tried my hands at birds in flight, from the flat area by the shore. There, the alcids, puffins and Common guillemots but also Razorbills (Alca torda) and a few Brünnich’s guillemots (Uria lomvia) flew over when coming back from the sea. The latter are rather rare in Hornøya, with “only” 600 pairs lost in the colony, but we managed to see them, with no picture made, unfortunately.

The 70-200mm was very adapted for flight pictures, as it was much easier to follow the birds’ trajectories, and to repeat this gesture time and again.

As we left Hornøya, I remembered my visit to Christiansø, almost a year before. There too, I saw alcids… but not at the same scale!

So what do you think, is this order or chaos?