In the middle of summer, my family came for a visit to Finland. This time it wasn’t about skiing, it wasn’t about figure skating, it was about sailing. Usually, it’s difficult to gather the whole family, because my brothers always have a sailing competition here, a sailing competition there… and in the end, there’s often someone missing. This time, everyone was there! That’s a growth, from my usual solo/duo trips.

END_OF_DOCUMENT_TOKEN_TO_BE_REPLACED

This winter, I had the chance to experience a day at the Biathon World Championship in Kontiolahti. This municipality is located in North Karelia, near Joensuu where dwells the nearest train station, and it was hosting the World championship for the third time after 1990 and 1999. It is situated near Russia, therefore there were a lot of Russian supporters along the tracks. The Russian flag was definitely the most frequent among the many banners held by the fans, and we felt like in Russian territory. Although Germany is one of the most successful countries in biathlon, beating all the other nations this year, we saw very few German guys. All the sponsors were however from Germany.

Biathlon is a sport were cross-country skiers have to shoot at targets with a rifle between short legs of skiing. This day, the men were competing in a relay 4×7.5km.

I went there with a friend. We took a train at 7 in Helsinki, and came back with an overnight bus which brought us exhausted but thrilled twenty-four hours later back to Helsinki. In the meantime, we visited a botanical garden brimming with butterflies and experienced the madness of a race memorable, for the first Russian skier missed its first shooting attempts. He left the shooting area ranking last, by far. To catch up with the first ranks, he and his teammates could count on the hord of supporters cheering every time an ammunition reached the target. After a fantastic rebound in an ecstatic atmosphere, they finished 4th, only dominated by German, Norwegian and French. 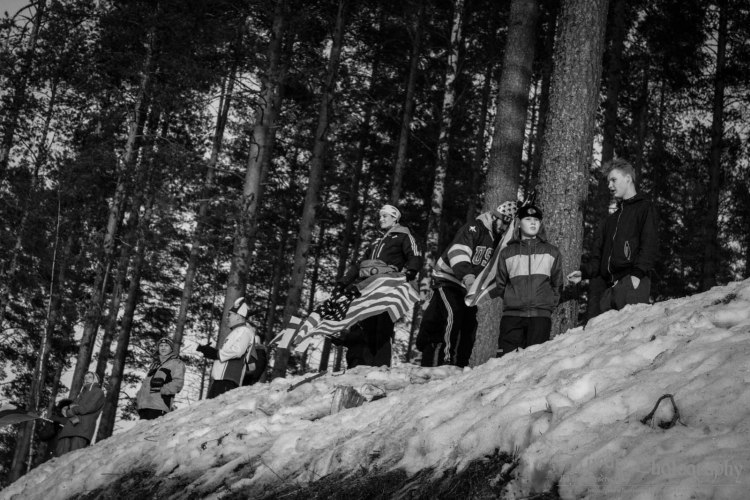 Later was organized in the center of Joensuu a medal ceremony. Men and women competing in the relays of the last two days, ranging from fifth to first rank, were equally applauded by the crowd. Amazing!