In the evening of our fourth day in Varanger, we slept in Vadsø, the administrative center of the county of Finnmark, home to some five thousand souls. In the morning, before driving to Ekkerøy, we visited the little town. Marci looked for a souvenir shop, but there didn’t seem to be anything of interest in the citycenter. What I noticed, in Vadsø but also in other towns, was a lamp store. I guess that, in places where the sun disappears for several weeks every year, inhabitants are particularly mindful about lighting in their houses, and so this kind of business thrives. I also liked the colourful houses.

In the harbour, at the end of a dam, lies a small wind shelter made for birdwatchers by a company called Biotope. They promote bird tourism in Varanger, and we’ll have the occasion to talk about them later, but for the moment, let’s just say that their shelters are well located, and really efficient. We used them extensively during our trip. 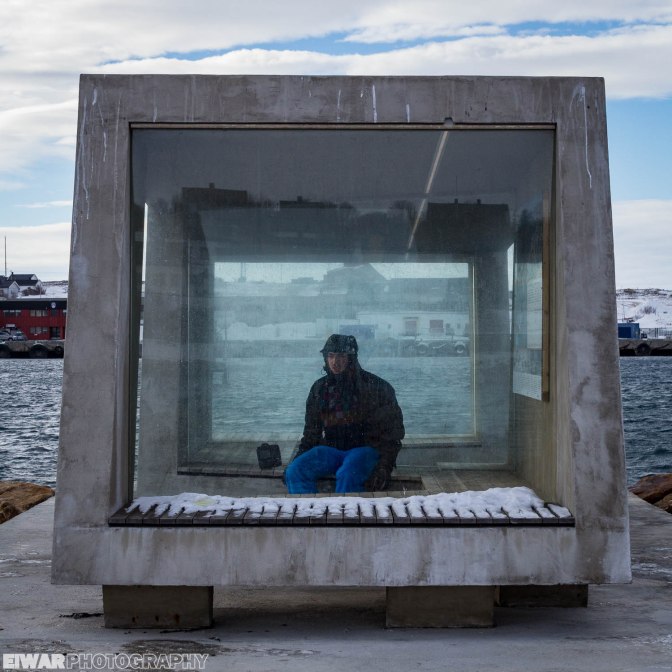 Small groups of eiders, Long-tailed ducks (Clangula hyemalis) and Great cormorants (Phalacrocorax carbo) wandered around, but there was not a lot of activity.

After the center, we reached for Vadsøya, the island where the settlement appeared first. A short bridge links it to the mainland, and when you arrive on the other side, and see the hotel’s façade, you immediately know what the main touristic attraction is!

We left the car there, and walked a bit to the eastern end of the island. My friend knew there was a mooring mast still standing there, which was used in Zeppelin expeditions to the North Pole in the beginning of the twentieth century. In 1926, the first expedition to reach the North Pole by air, led by Italian airship designer and pilot Umberto Nobile, American explorer Lincoln Ellsworth and Norwegian explorer Roald Amundsen (yes, the guy who had been the first to reach the South Pole fifteen years before), paused in Vadsø on its way North. Two years later, Nobile came again with another airship, which tragic end brought Amundsen to his death during a rescue operation.
I love to read those stories from another time, I can spend hours on Wikipedia only for that.

When we walked to the mast, through the windswept tundra, I glimpsed movement to my right. I turned, and far away, there were two Mountain hares (Lepus timidus) looking at us. Brown hares (Lepus europaeus) are a common sight in Helsinki, I often see them when I come back home, but even though they turn a bit grey-whitish in winter, they are still pretty much brown. Those Mountain hares, they become completely white, in a perfect adaptation to their environment.

That’s a fantastic asset on snowy land, but it turns into a terrible liability if the winter is particularly mild, like it happens more and more further south. A white hare in a brown field, what a target for the starving fox, lynx or goshawk… sad times.

Varangerfjord | Whatever floats your boat | Advanced course in eiderology | Båtsfjord | On the high road | Clear skies | Here are the birds | Varanger, Day White