Today’s article is a bit different from the usual posts… a bit more touristy, if you will! If you are not interested, please scroll down to the last section, there’s a surprise 😉

You know I had a van in New Zealand, in which I drove kilometers on roads and tracks and slept countless nights under the stars. Sounds like a dream, doesn’t it? In many respects, it was; the flexibility I had was appreciable, for I could stop wherever I wanted (kinda) and be close to birds and views for sunrise and sunset. That said, my ride was a simple one, and while the bed was comfy enough, I was not protected well against the weather. If it rained, I had to get wet to eat anything. I was often cold. Oh, and I didn’t have a shower! All this to say that, even though it gave me freedom, life on the road was also tough sometimes.

Mackenzie Country, before it started to rain. Scroll down for more!

Every 2-4 days, I stopped somewhere “civilized”. Quite often, it was a holiday park (i.e. a camping ground with amenities), and sometimes it was a hostel. I traveled on the cheap, so price was a criterion; when I stayed at hostels, it was in a dorm (4 to 8 beds). The main point was to have a shower (aww yiss, the bliss!), but I also enjoyed the kitchen (where I often cooked rice/pasta and boiled eggs for a few days) and the shelter from the elements.

So, without further ado, here are my favourite hostels in New Zealand. You can see this article as guidance for travellers down there, and as thanks to the hostel managers and owners who created those welcoming places. I don’t have any images of the hostels themselves, but I will bring in a few shots of their respective regions.

ALSO, if you are not interested, please stick around and scroll down to the last section: I have some exclusive shots of my second visit to the Mackenzie Basin and the Black stilts (Himantopus novaezelandiae) that call the region home.

The 5 best hostels of New Zealand

All these have in common their cleanliness, their quiet vibe and their proper wifi connection [Beware, a functional (read unlimited or almost, stable and reasonably fast) internet connection is not to be granted in kiwi accommodation!]. You can find them all (and hundreds more) in the Wikicamp app, a must-have if you are traveling there without a definite plan. Oh, and in New Zealand, hostels are called “Backpackers”, in general, and in many places young people actually live there for extended periods of time (some weeks or some months).
Lockers are not always provided, but I never felt scared of leaving some valuables (laptop, camera) in the rooms. New Zealand is a safe place, generally speaking, and that applies to hostels.
Note that, even though I stayed in dorms, most places also offer private rooms (with shared bathroom and kitchen).

Matamata is the settlement closest to the Hobbiton movie set, so there are many people traveling through the place. Surprisingly, the hostel is quite recent, but it seems to fulfill a need, for many of its inhabitants are short-terms guides at the movie set. Dorms are small shipping containers accommodating 4 people. Shared spaces are small but pretty; there’s also a table tennis table 😉 I rented a bike for a ride to the Wairere Falls for only 15 dollars. The only downside is that heavy trucks drive in front of the hostel all day and all night, so your sleep might be troubled. I highly recommend the trip to the waterfall, then you’ll be tired enough not to care about that!

I stayed there 4 nights on my way north, hoping to get to Blumine Island to see the Malherbe’s parakeet (Cyanoramphus malherbi), but the weather did not cooperate. After stunning days around Cape Farewell, I got to enjoy 4 days of rain and choppy sea… There, I slept in my van but could still use the shared facilities. That’s something available in some hostels, and worth asking for if you’re interested. At that point, I was tired of dorms: I would have to transfer stuff from my van to the room, and back, I would have to deal with other people, their schedules, etc… I was happy to retreat to my special place after spending the day in the living room, by the fire. I loved the chocolate pudding in the evening!

Located on the West Coast, it consists of several small buildings scattered in the rainforest. Stunning! I think the name of “retreat” is well deserved, for it was a refreshing stop. The narrow lanes in the jungle were a tad tricky to navigate with my van, but I managed, and enjoyed the peace. The wifi was not reliable in the evening, but the location made up for it. It’s a 5-minute drive away from the phenomenal Pancake Rocks! In the morning, I bought a delicious home-made loaf of bread before continuing north.

This dwelling located in Wellington, where I stayed 3 weeks, was a true gem. It’s a bit more expensive than the others, but as a long-term guest, I got a good price. The facilities are stunning, and well kept by an “army” of caring staff members (wwoofers, i.e. persons who work a few hours a day for accommodation) until late in the evening (in most places, dirty dishes accumulate after the last round and the scene is ugly in the morning). I was so grateful for the receptionist to find me a bed for three weeks, even though they were at a premium and it seemed like there was no possibility. There’s a small, private cinema room in the building, and tennis courts nearby. The downside is that they only have a handful of parking spaces; the rest is paying on-street parking (I didn’t pay and got a fine xD). On the other hand, the location is perfect to explore the city, and there’s a supermarket just accross the street. 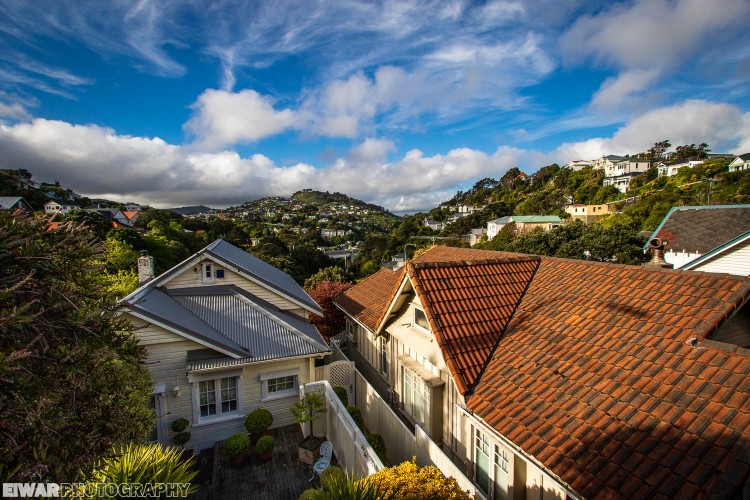 The view over Lake Wanaka and the mountains that surround it is beautiful; from the living room I could see sailing boats racing. I was there for about a week in December, a very warm and pleasant stay. Alright, I initially didn’t plan to stay in town so long, but my car broke down and I had to wait for the garage to repair it! Actually, without that incident I might have never discovered this hostel, but I liked it so much I came for 2 more days about a month later. The internet is limited to 10GB a day… which is a lot more than you’ll need 😉 A cozy place for a memorable time! 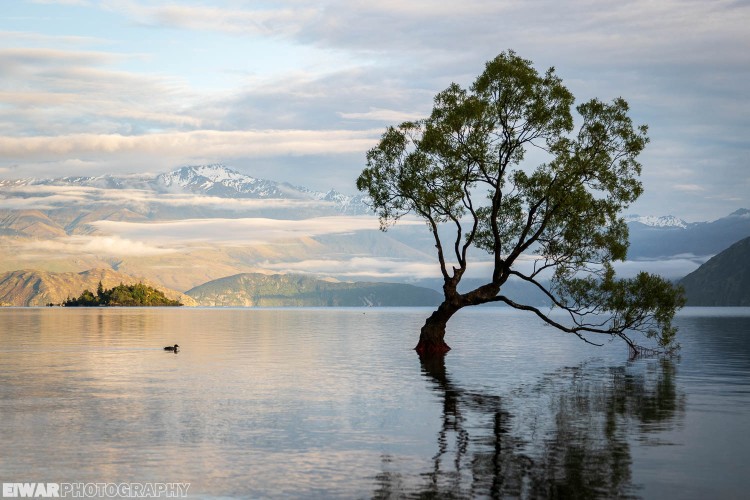 So, here’s my list! Do you agree? Have you made better discoveries? You tell me in the comments 😉

A second visit to the Black stilts of Lake Pukaki

So… it seems I forgot to mention that part, even though it would have fitted perfectly into the mountainside chapter of my South Island exclusive files. In April last year, I left Dunedin for a one-month road-trip that ended up in Rotorua. My first stop was the Mackenzie Basin, a place I loved when I first visited in December. On the shore of Lake Pukaki, I met the lovely Black stilts again. The water was much higher than during my first time there, so instead of muddy fields and braided channels, I was left to work with a dirt track that abruptly ended in the lake. Fortunately, the stilts hung around, and I even managed to photograph a New Zealand pipit (Anthus novaeseelandiae). 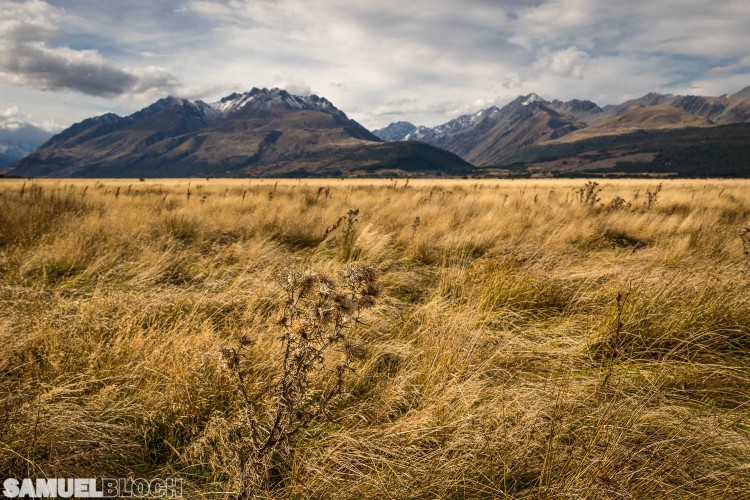 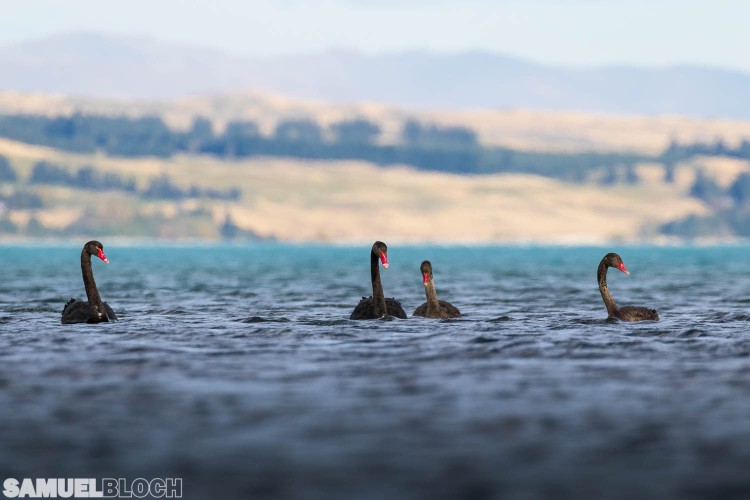 The day had been sunny, but in the evening clouds rolled in, and light in the valley became a bit weird, almost purple. I had a lot of difficulties balancing it in post-production, and often resorted to using black and white. After some telelens shots, I spent some time with a wide-angle lens, trying to show those amazing birds in their habitat, at the feet of majestic mountains (Mount Cook, the highest, unfortunately remained hidden from view).

Black stilts are critically endangered, and the object of a conservation program that includes captive breeding and reintroductions. Winter 2020 brought great news, with the announcement that there were 170 adults in the wild, a 30% increase (+40 birds) over the year before. It feels great to see that, when we protect (with sufficient fundings), species can rebound. 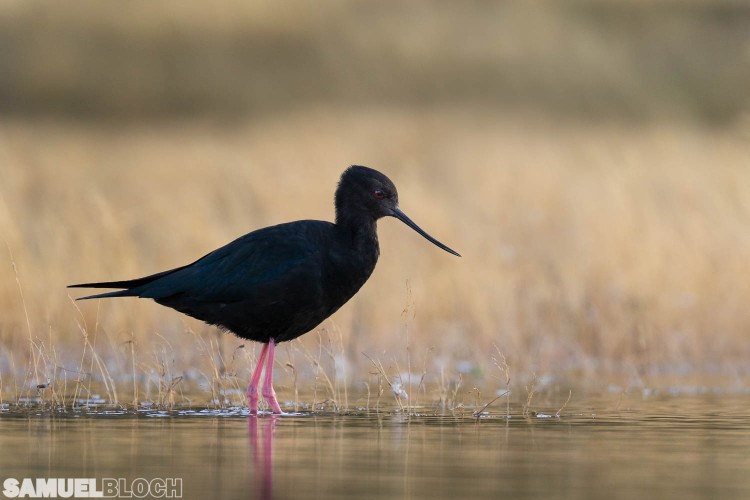 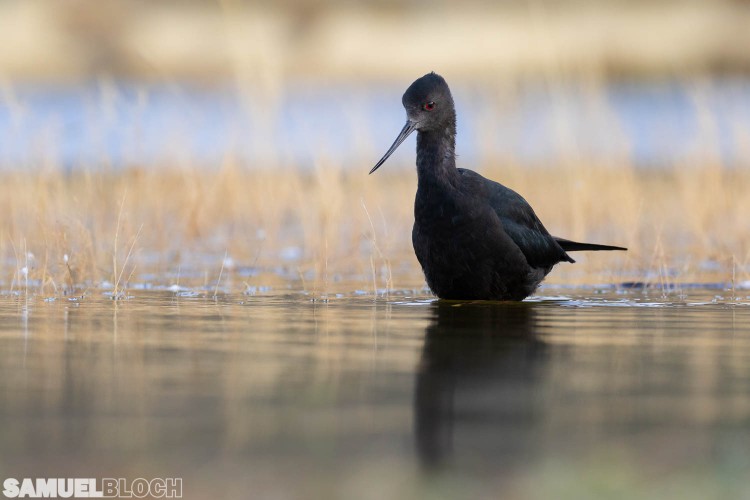 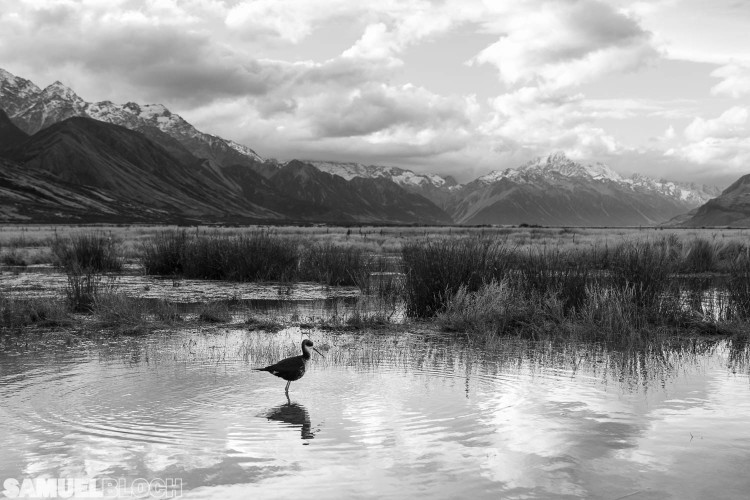 The stilts stayed very close, moving back and forth in front of me, but still it was challenging to photograph them: black as they were, I couldn’t show much detail in the adults’ plumage. They had to remain silhouettes, but for that to work, I had to have a clean background behind them, so not messy clump of grass. Meanwhile, I had to be very mindful of my composition, to show the mountains in the background. Phew, hard work, but I think it paid off. 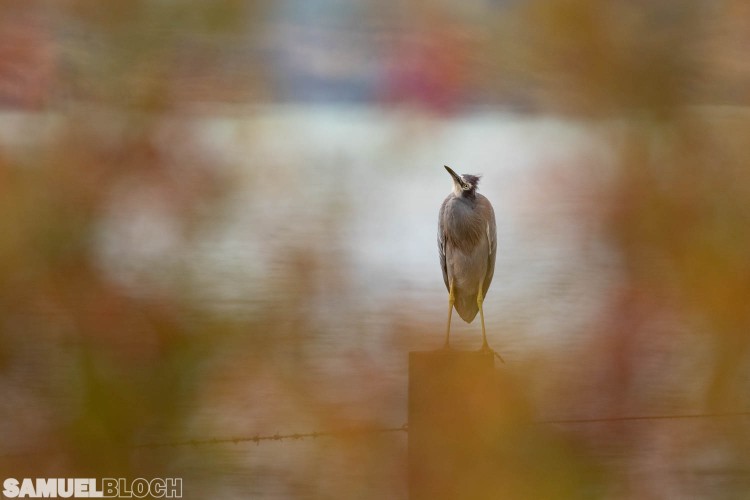 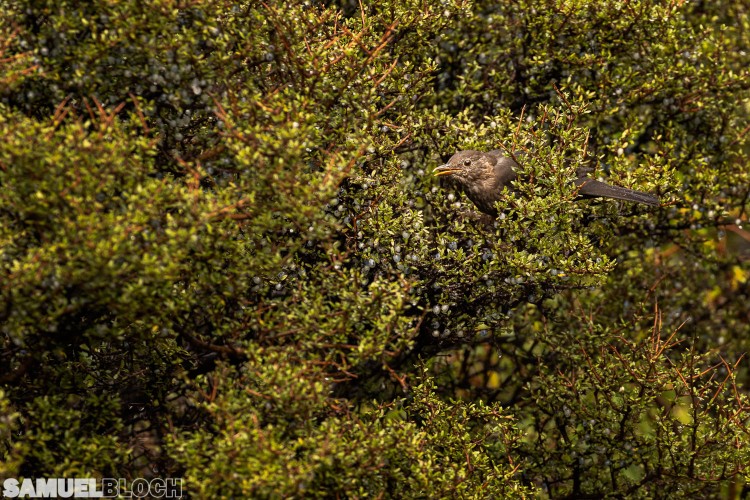 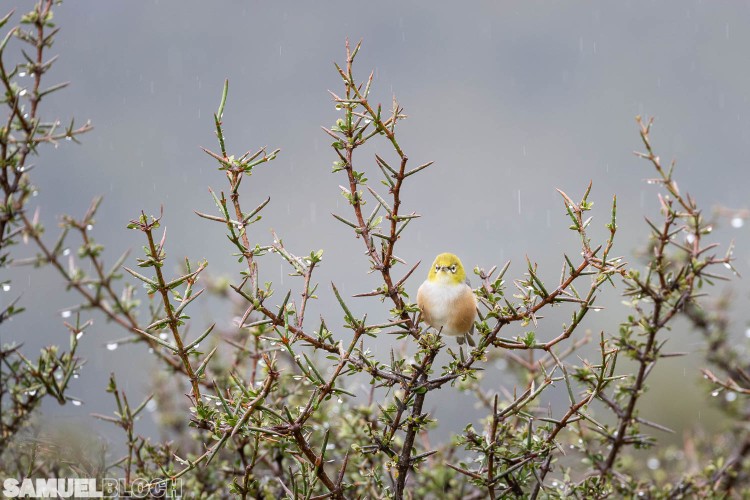 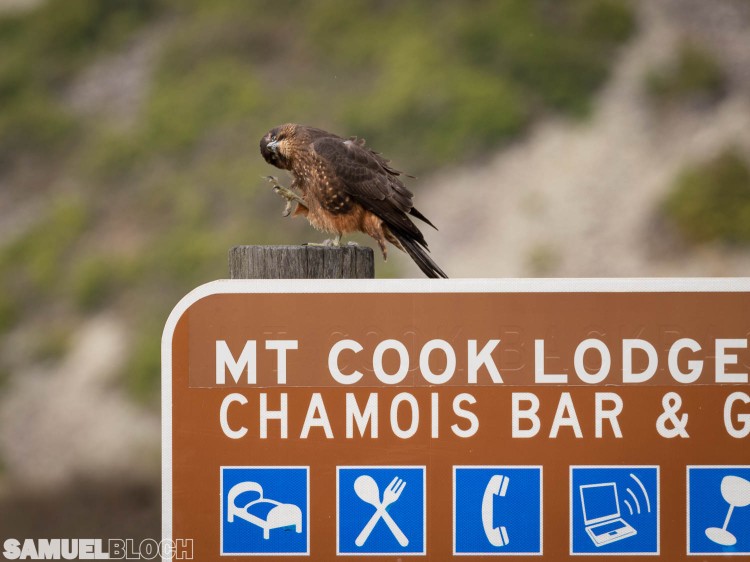 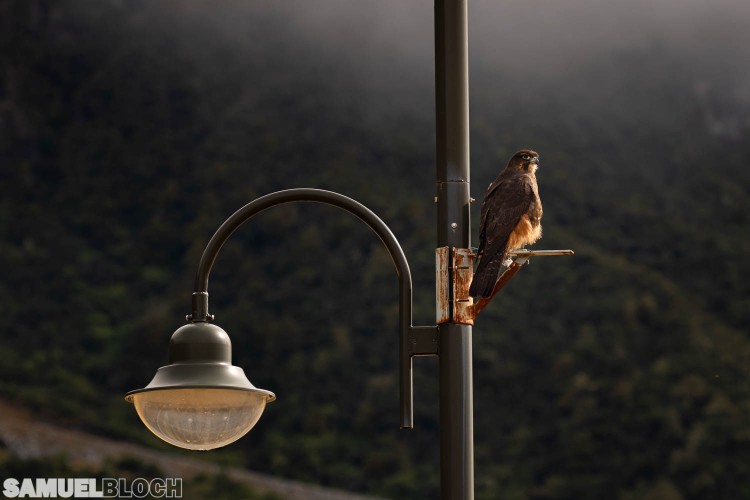 After Christchurch, it was the Nelson Lakes, then Cape Farewell, Castlepoint and finally Rotorua. Not that the latter was the end of the story, for more adventures waited just around the corner. Stay tuned 😉

Want to know where I went? Check out the map! 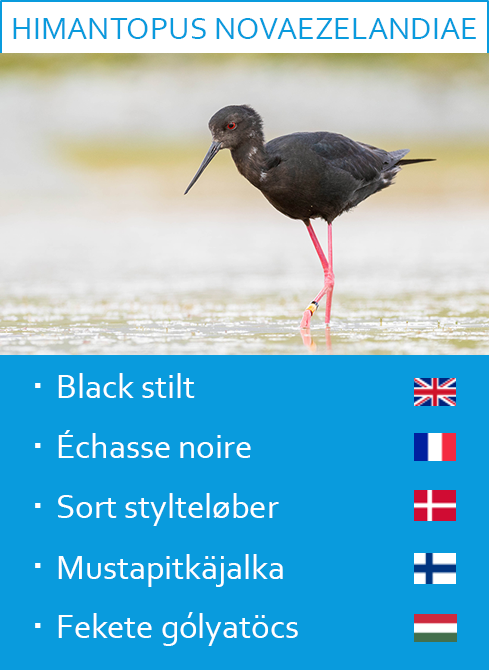