As the crow flies, it would have been straight north from Christchurch. However, Maui’s canoe wasn’t flat, and the Southern Alps run from one end of the South Island to the other. After I left the cultivated plains, I was taken left and right, east and west, up the passes and down the valleys, sometimes accross the forest, sometimes accross meadows, in the shadows of high peaks dusted by snow. It was the end of summer.

My lunch break by Maruia Falls (what would a day on the road in New Zealand be without a roadside waterfall?) was interrupted by inquisitive wasps, so I continued on to Lake Rotoroa, where I had booked a room. On the way, slopes disfigured by clear-cuts, testimonials to Man’s greed, made me fear for the worst, but as I entered Nelson Lakes National Park, nature ruled again. Sigh. I found myself lucky to have cash to pay for the night, for I could not have paid with card, then headed to the shores of the lake. Once again, I reaped benefits for waking up early: in spite of a long drive through the mountains, I still had a couple of hours of sunlight to work with before the night. 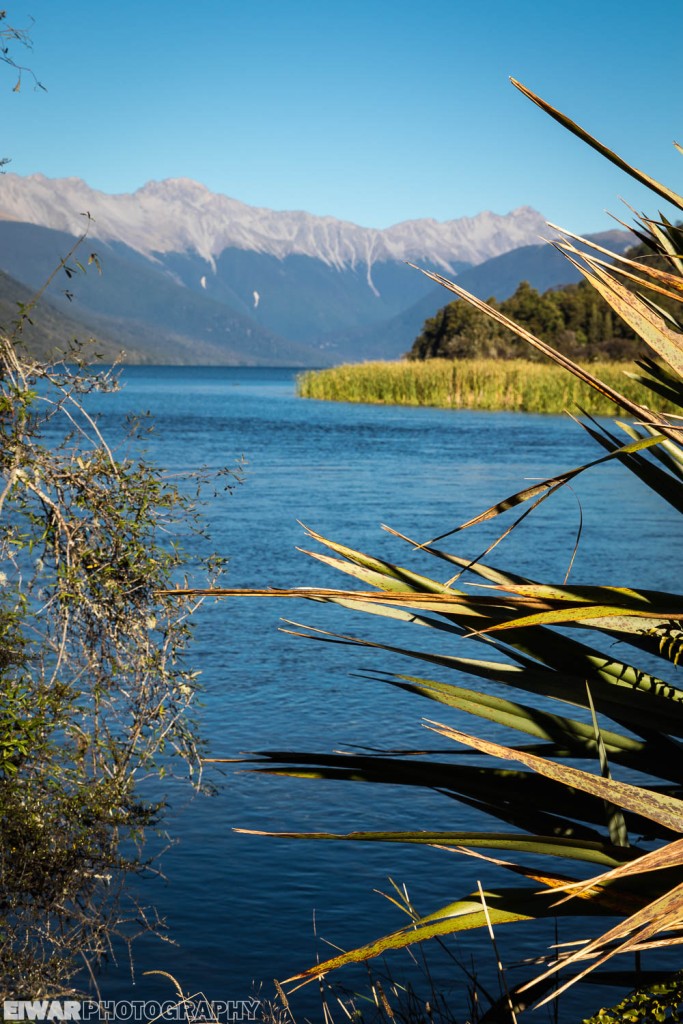 The scenery was rugged, with this peculiarly regular bushline up the slopes of the glacier-carved ranges. From the comfort of the valley’s floor, I could only imagine what it was like to stand at the top and watch the sun go down. 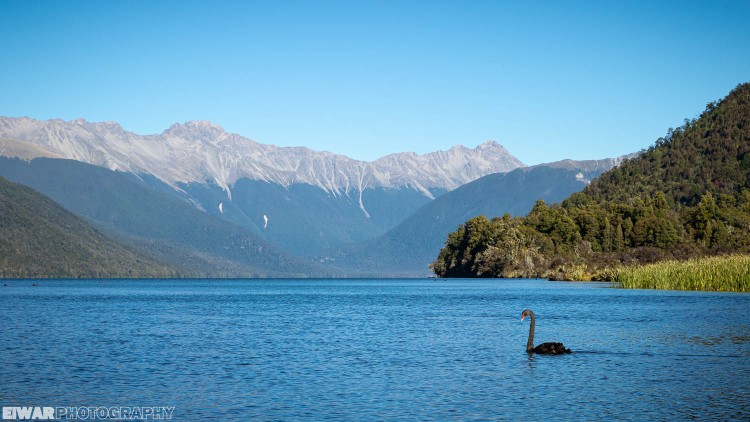 In the morning, I walked in the cool forest. The waterfall at the end of the path proved disappointing, as did bird activity, but fortunately vegetation was fascinating. My favourite plant that day was young lancewood… doesn’t it look incomplete, as if its top had been cut?

Then I drove to the next valley and the national park’s main center, Saint Arnaud. I carefully studied possible day hikes, and decided to climb to Saint Arnaud Range on the day after. I had my picnic by Lake Rotoiti, but as the sun raced accross the sky, I realized my plan was doomed. You see, in a mountainous area, you need to be at the top to enjoy the best light, the one that peeks over the horizon in the early hours or caresses the land before diving behind it. If I started my hike in the morning, I would be in the shadow during the whole ascent (good potential to be cold!) and then I would arrive at the top and the sun would be too high in the sky on the other side. What if I left immediately?

After watching a knot of some fifty Long-finned eels (Anguilla dieffenbachii) feast by the jetty, I established a new time record at packing my stuff and started to walk through the “mainland island” of Rotoiti, a forest area where mammal invaders are controlled to allow native wildlife to thrive. To be fair, bird life didn’t impress me there, but I had another prize in sight anyway.

I climbed quickly through those boring woods, exhausting myself in the process, but I reached the end of it in two hours. My ankles were suffering already, but the worst was yet to come. The view from the Parachute Rocks was beautiful, so I allowed myself some rest before the last slope, a steep and treacherous ramp that took me to the top of the Saint Arnaud Range. 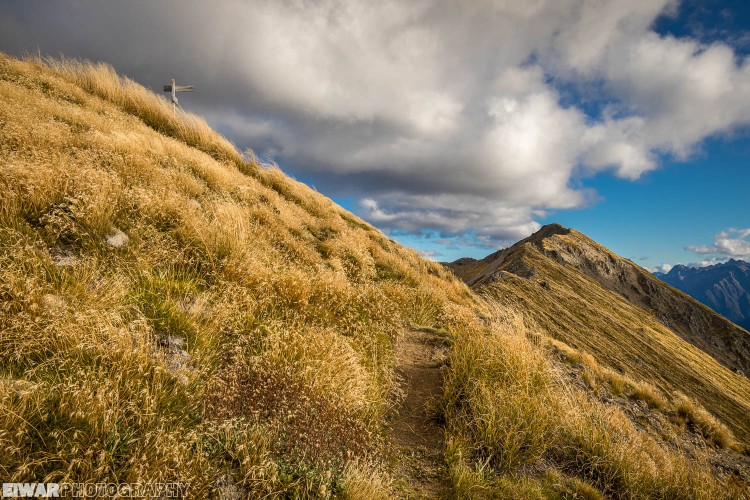 When I arrived, I was stunned, for the other side screamed of wilderness, of alpine conditions, of adventure. Nowhere could I see signs of human activity, a rare sight in New Zealand that I had come to cherish. A cold wind blew, so I removed my sweat-soaked t-shirt and put a jacket on before walking a bit along the ridge. I had a few snacks and took lots of pictures. 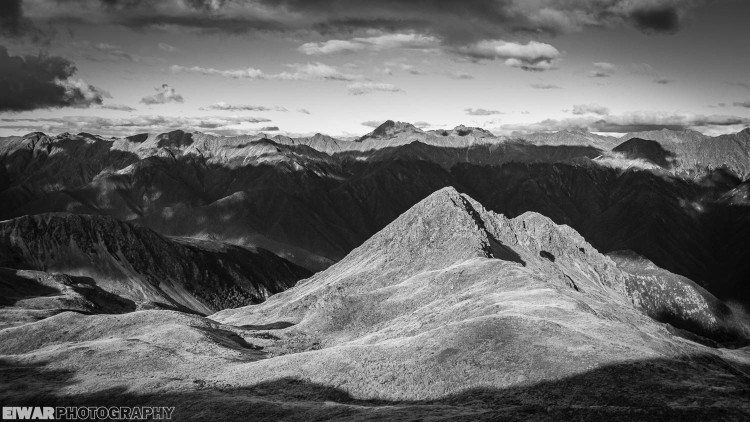 On its descent to the other side of Earth, the sun hid behind a bank of clouds.

After a perilous descent, I was back at the Parachute Rocks, at the edge of the forest. That’s the moment the sun chose to show up again. In a matter of minutes, it bathed the whole range in pure gold, a hue so intense I had to pinch myself to believe it was real. 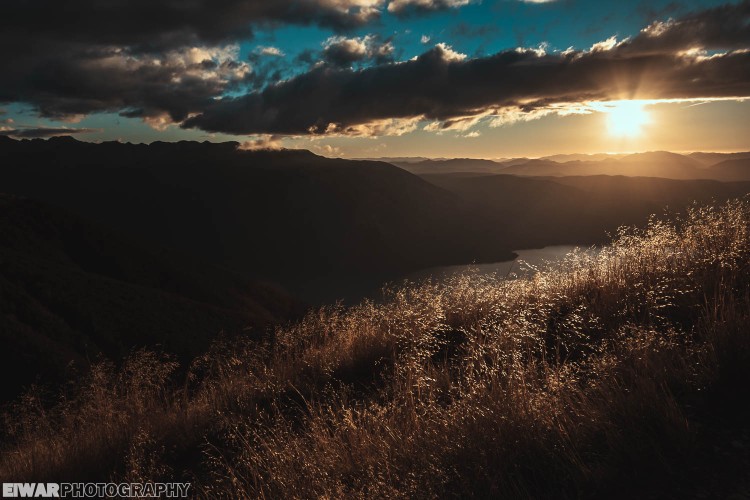 I didn’t expect such a show, and although my initial plan was to go down while light remained, I couldn’t detach myself from the view. Or rather, I was torn between staying and going, and kinda started going down but stopping here and there for more pictures. Whenever I convinced myself I had seen it all, the glow intensified, and soon it became a deep orange. It seemed to set the gnarled trees ablaze in a mesmerizing symphony of colours.

There, I cursed myself for not staying above the treeline until the show was over. In hindsight, maybe the view from the forest wasn’t that bad, after all! 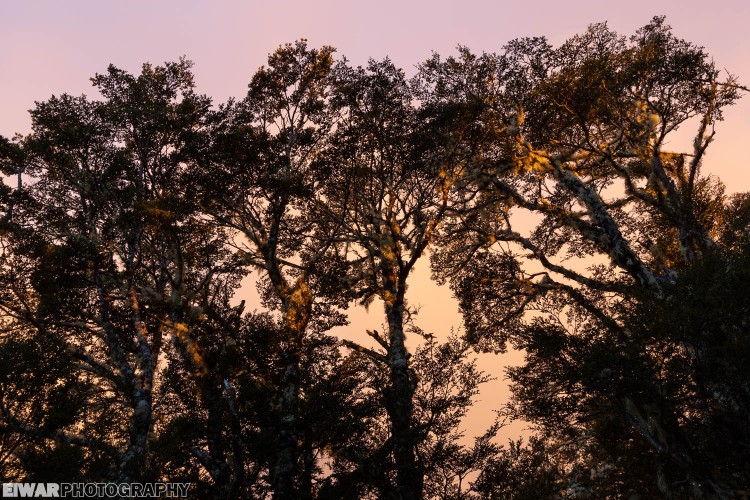 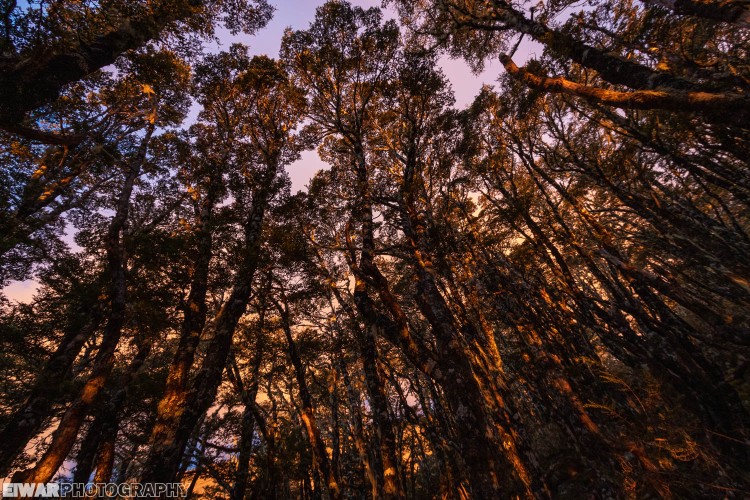 Remained the hardest part: the climb down, two hours through the forest in absolute darkness (I had anticipated that) with a head torch on low batteries (that, I hadn’t anticipated!). The track was fairly easy to follow on the upper section, but further down, I couldn’t help but doubt. The way was marked with orange triangles (spoiler alert: by night, they turned grey), but for the way up! On the way down, I couldn’t see them… After every large tree, I turned to see if there was a triangle: if there was, I felt invigorated. If there wasn’t… well I walked to the next tree while keeping in check the panic I could feel rising inside me.

Even though I know nothing can really happen to me, I don’t like being alone in the woods at dark, it frightens me, which can be a problem when one wants to see kiwi! Of course, that night I made it to the car safely, and could enjoy a well deserved night of sleep, still amazed by what I had witnessed up there.

In the morning, I went to the visitor center again and asked how much I had climbed on the day before: 1000 meters, I was told. Not too bad! 😀

This is my submission to Robin’s Walktober this year, my third if I remember correctly. Although it wasn’t walked in October but in April, I hope it will still be appreciated. 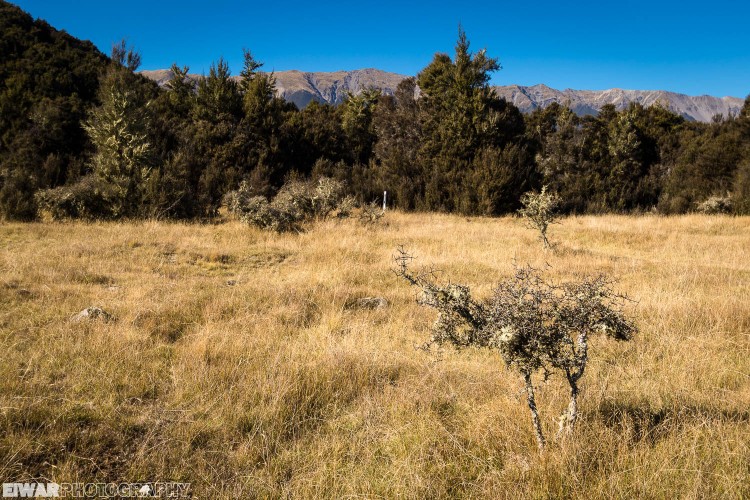 13 thoughts on “Painted with gold”