My first day on Tiritiri Matangi was one of discovery, of initiation. The following ones were days of deeper exploration.

As I mentioned before, there was no ferry coming to the island on Monday and Tuesday. That meant that, for 2 full days (which actually turned into 3 when the ferry didn’t come on Wednesday either), we were alone. One ranger, two volunteers and three photographers on an island of 4 x 1 kilometers. Oh, and lots of birds! 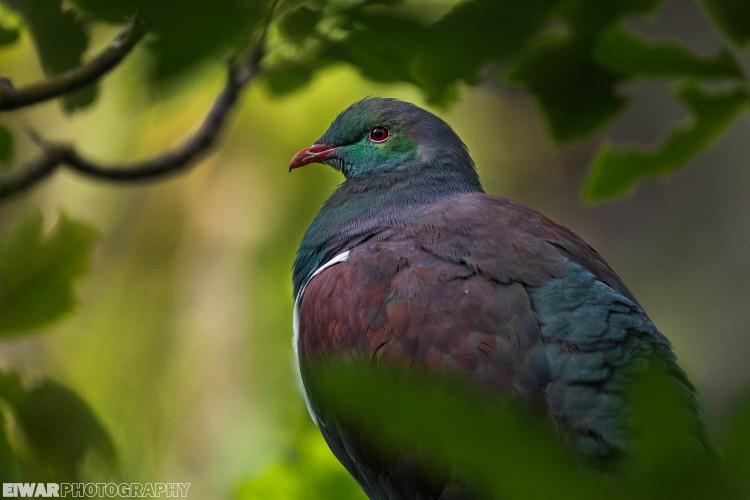 Water troughs have been built for the birds to bathe, and in front of them, there’s a bench for the voyeuristic humans. This way, one can have great views of forest birds, especially Tui (Prosthemadera novaeseelandiaea), Bellbird (Anthornis melanura) and Stitchbird (Notiomystis cincta). The latter is a rare endemic; at some point, before being translocated to other pest-free sanctuaries, it was only present on Little Barrier Island, further in the Hauraki Gulf. At the moment, its total population is “unlikely to exceed” 2000 birds. 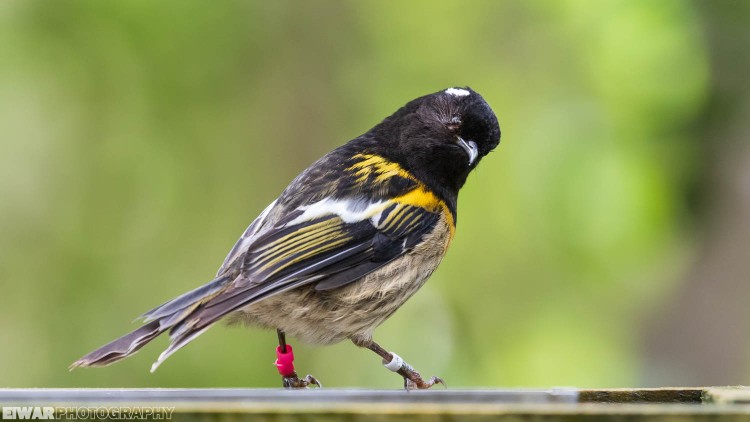 These three species are nectar-feeders, and they enjoy similar sources of food. However, the Tui is much bigger than the other two, and therefore it tends to bully them. To ensure they all have plenty of food available, sugar feeders have been set up, with chicken wire only allowing smaller birds in. A delight for Bellbirds and Stitchbirds!

Let’s take a moment to think about New Zealand’s birds’ names. Many native birds are unique in the world, and so they had to be named from scratch when the European discovered and explored the region. What’s surprising is that some have truly English names (Bellbird for instance), while others have kept the names given to them by the Maori, who had lived in New Zealand since ~1300 (Tui or Takahe, for example). 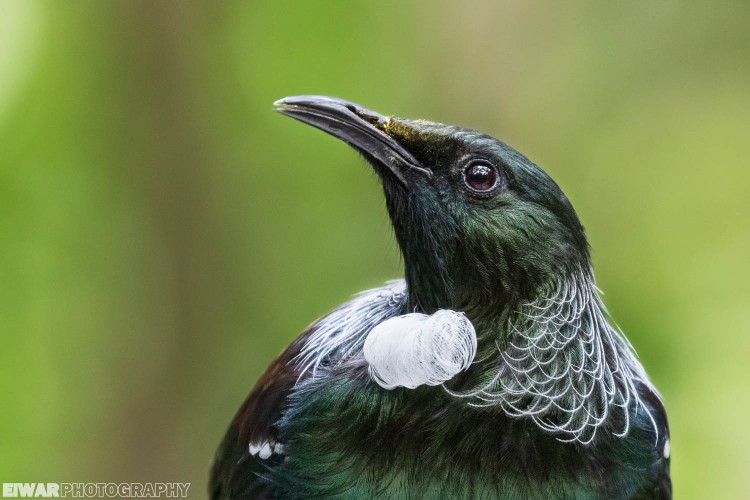 However, even those with English names are often referred to by their Maori names; therefore, you might hear Hihi instead of Stitchbird. Some are even better known under their Maori name, even though they have an English name: I’ve never heard anyone said Australasian swamphen here, only Pukeko (it’s shorter for sure).

In addition, I’ve noticed that New Zealanders use names that differ from the international norm. Thus, the Kelp gull is here the Black-backed gull, and the Silver gull becomes Red-billed gull. Because there’s only one kingfisher in New Zealand, the Sacred kingfisher becomes Kingfisher. Simple, eh?
For the sake of uniformity, and because I plan to travel the world and reach an international audience, this blog uses the IOC bird list.

My time on Tiri was rather cloudy, but we had one evening and one morning that were absolutely stunning. Sunset on Monday was so cloudless and windless it made me think of the Mediterranean shore; however, it got quickly cold after sunset, while I waited for Little penguins (Eudyptula minor) that never showed up. 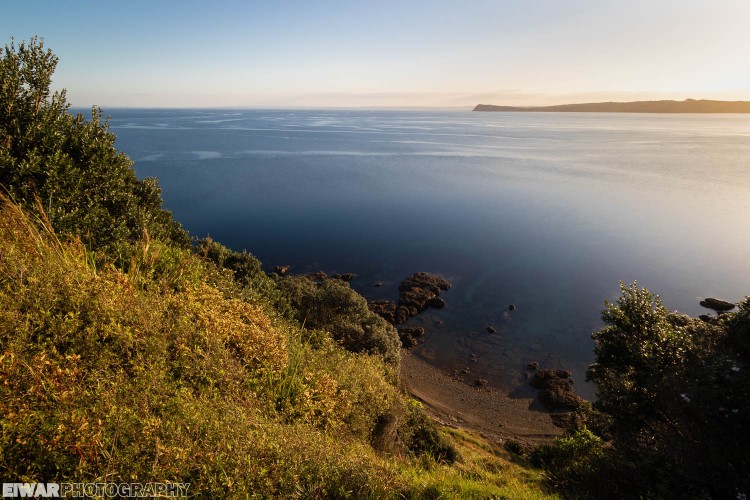 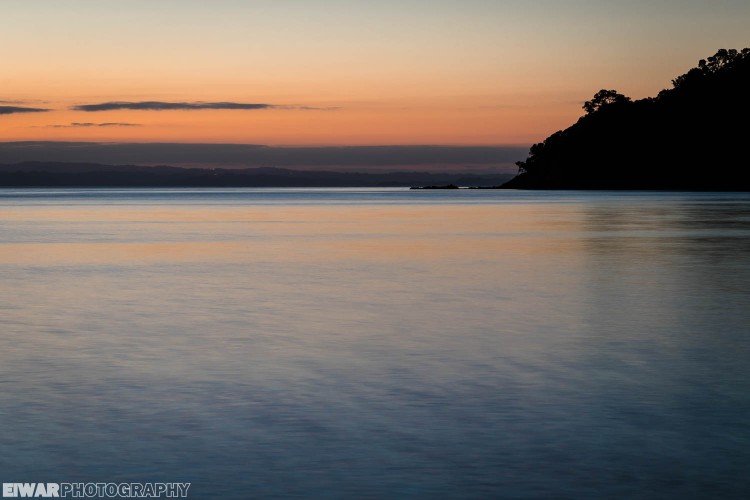 The morning after, I took advantage of the sunny weather to walk the great tour around Tiri. I discovered the rugged Eastern coast first, and came back along the other shore. It took me five and a half hours, including lunch and photography time. 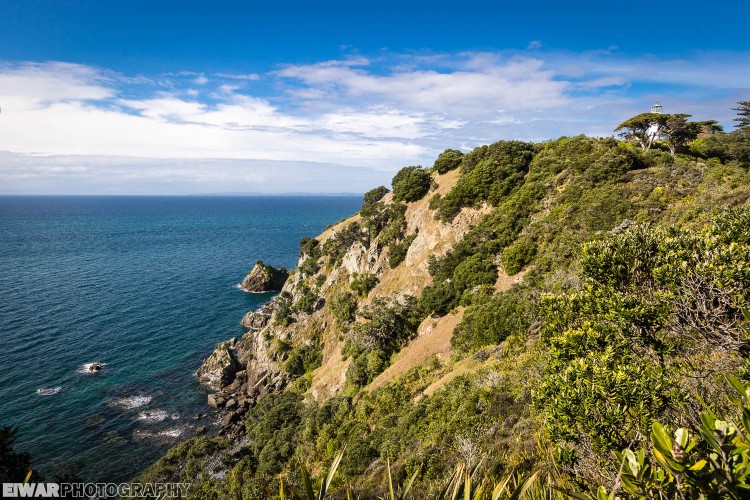 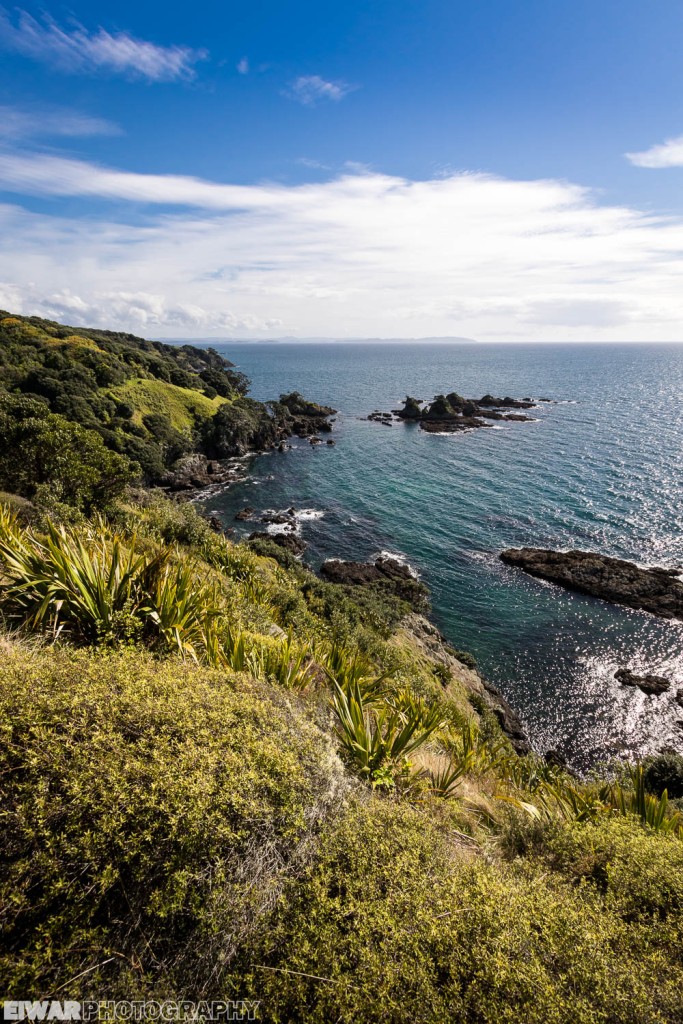 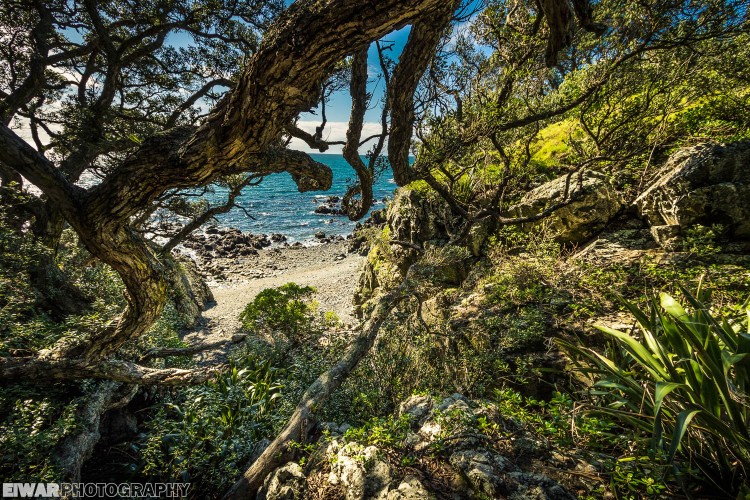 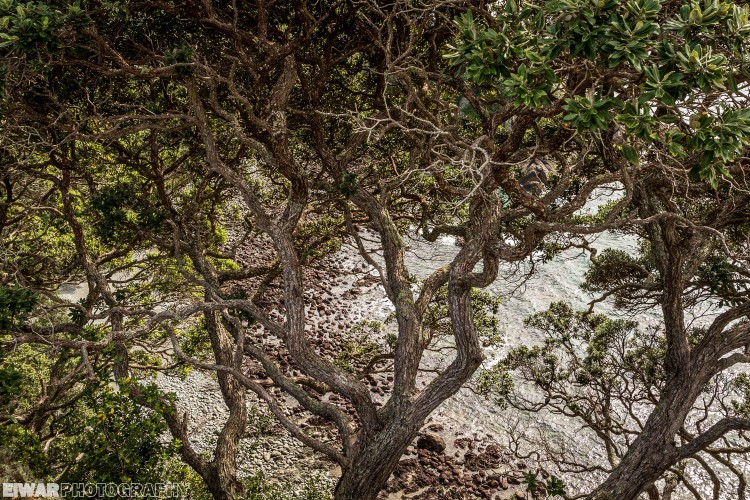 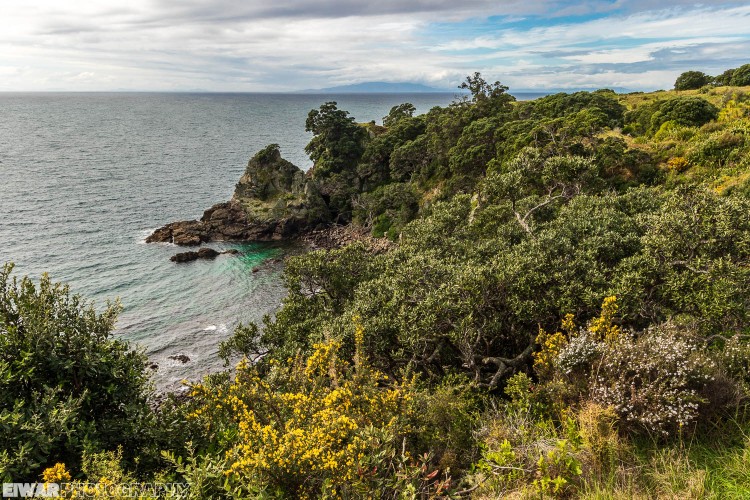 Near the wharf, artificial burrows have been built for the penguins. They look like igloos made of stones, and have a small window at the top, which you can open to look down. Usually, there’s a tiny creature looking at you from below, and if you’re lucky, there might be two!

Little penguins spend the day inside, or at sea, but they are seen on the shore only at dusk or before sunrise. I didn’t manage to sea any on the beach, but I saw them inside their dwellings. In addition, I heard them during a night walk.

The main incentive for night walks is of course the important population of Little spotted kiwis (Apteryx owenii), for there are between 80 and 100 of them on Tiri. Unfortunately, if they were heard very well, I didn’t manage to catch any with my head torch… There will be more opportunities!

Because it’s located so close to Auckland, Tiri sees many big ships pass by: container ships, tankers, autoliners… in this, it reminded me of Skagen and Gedser, in Denmark.

Of course, the tourist ferry is much smaller… which doesn’t really explain why it didn’t come on Wednesday, for the weather was fine all day after the night’s small storm. That said, we didn’t complain… one more day in paradise for us, “not sorry the boat didn’t come”!

That allowed me to make photos of the Takahes as they roamed near the houses. These big chickens (3kg, that’s three Swamphens!) essentially eat grass, but when this one found a worm, it was added to the menu nonetheless and swallowed in no time. 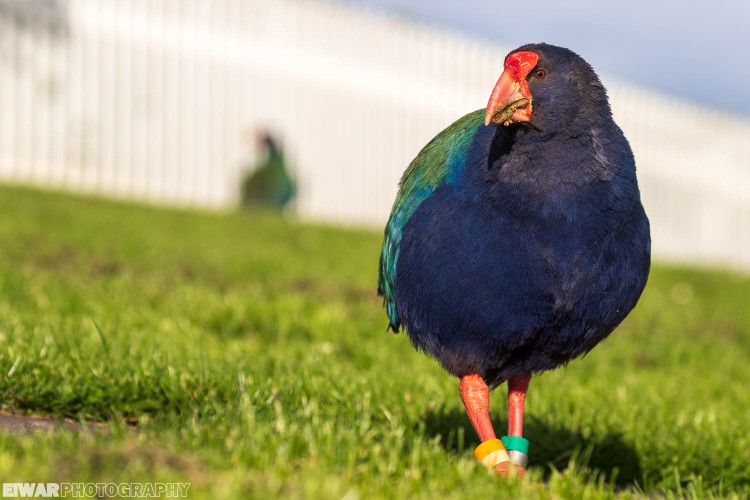 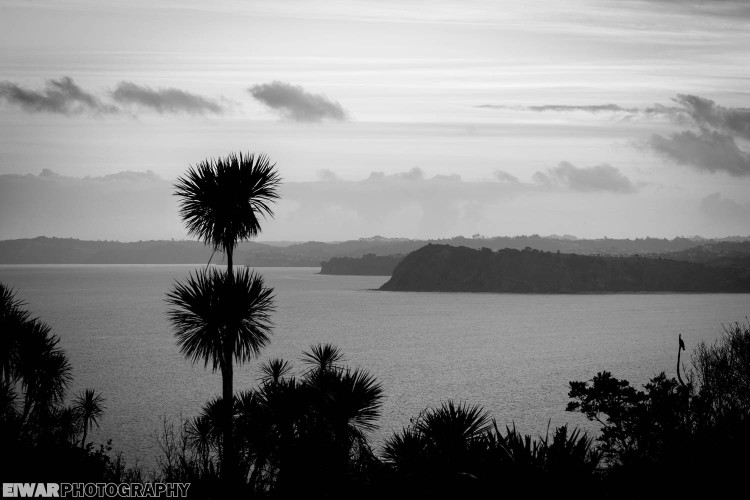 I didn’t manage to show you all the creatures I encountered on Tiri in this article, so there will be another one before we close this chapter. Stay tuned! 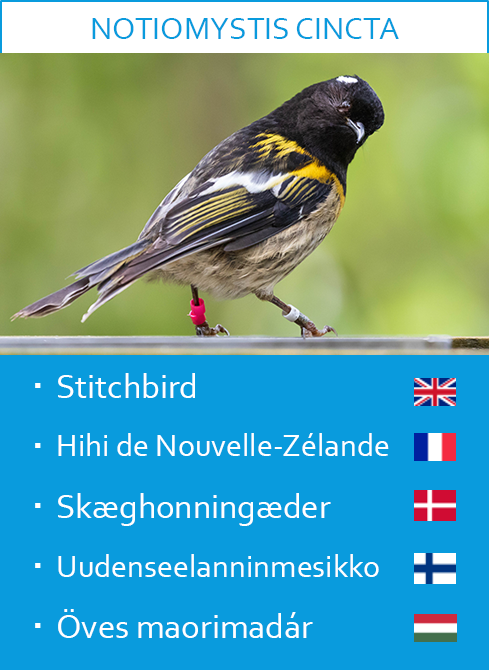 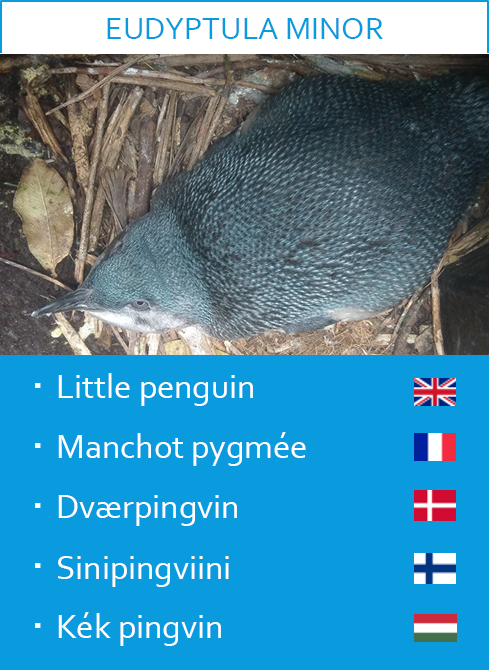 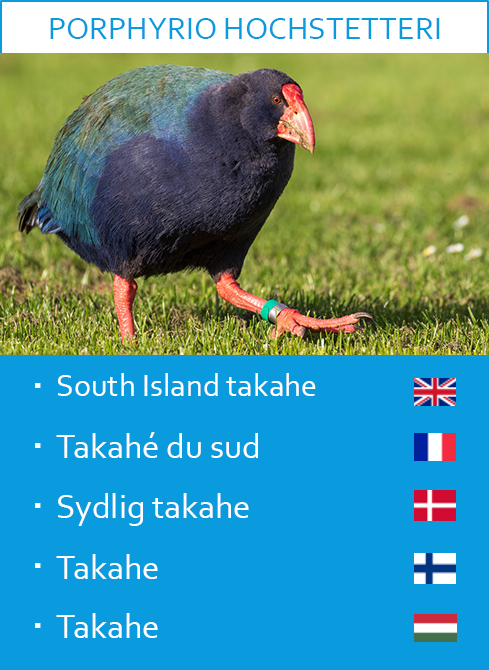 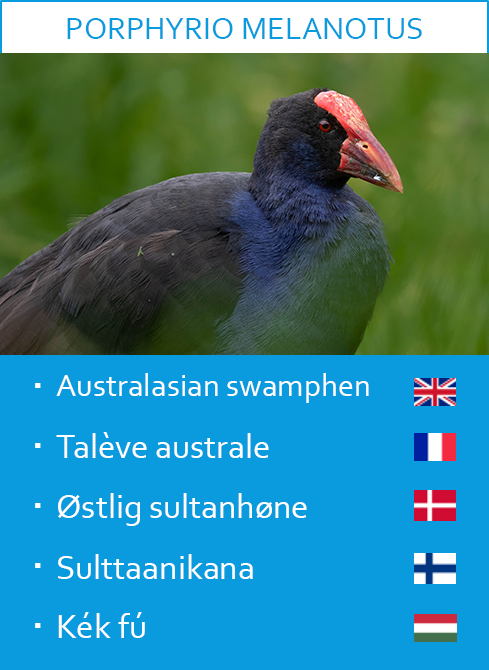 8 thoughts on “An island for myself”