I had a terrifying morning. It had started well, I had woken up early and had breakfast at the back of the car, the air was cold but the sun shone from time to time. It looked like a fine day.

Then I tried to walk away, and in doing so, lock the car. Except it didn’t work. I pressed the button on the key, times and again, but nothing happened. I thought the fresh night in the tent might have depleted the battery, but I had managed to unlock the car with no trouble. I didn’t understand.
Sunday morning, 6 o’clock, basically in the middle of nowhere. Oh, and I didn’t mention my phone’s battery was completely empty. Stay calm, Samuel.

Fortunately, the car was open, and I had access to the car’s manual. Said manual was only in Finnish, but with the illustrations I hoped to gather some knowledge. First, I managed to understand I could still start the car without battery in the key, by bringing the key close to the “start engine” button. Big “ouf” of relief, I was not stuck there. I wondered whether the local town would have the specific battery needed to power the key, but at least I could drive wherever needed.

My second fear was to be able to lock the car (miracles happen), but then be locked out on the key’s whim. So I dived into the manual again, and learnt how to unlock the car manually. I was still annoyed, but I wasn’t lost anymore. And then I removed the battery from the key, put it back… and it started to work properly again. “Have you tried to switch it off, and switch it on again?”

As it turned out, I had no other problem until the end of the trip, and quickly forgot the incident. But what a fright!

I started my trip by driving west to Karigasniemi, where I turned north along the Teno river, a wide waterway embracing yellow sandbars and making its way through green hills and black cliffs. On the other side was Norway, and at a bend of the road, I realized for the first time what I had got into with this trip: mountains covered with snow, under dark clouds, peeked behind the hills. They looked cold.

Later, I arrived to Utsjoki, which I imagined as a “lively” (as much as a Lapland town can be) border post. It was in fact very, very, very quiet. I got to see the church, Carl Ludvig Engel’s last and northernmost creation (he’s the guy who built Helsinki center after the city was promoted capital of the Great Duchy of Finland, when Russia took Finland from Sweden in 1809). This very classical rock church doesn’t really look at home in this wilderness, but I liked the stark contrast.

I enjoyed a few rays of sun when I visited the area, which also includes huts used by visitors in the old times. Due to great distances from home, people attending church events or market days stayed in these. More details here.

On the dirt track from Skalluvaara, another reindeer roundup place like in Karigasniemi, I met an elk.

On the road there, I stopped under a light drizzle, to take photographs of the stranded ice that had not melted yet. Surprising sight, reminiscent of Alaska… I almost expected to see a grizzli bear trying to catch salmon in the rapids. Instead, only men on a boat and gulls in the air. 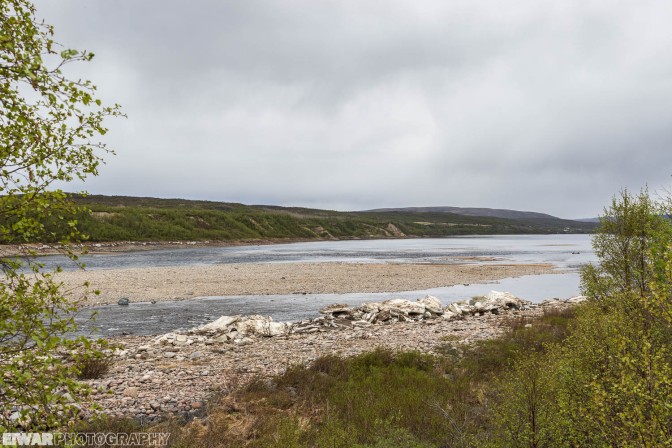 It rained all night. In the morning, I went for some shopping in Tana Bru, the “Tana Bridge”. Same river, but a different country: in Norway, the Teno river is called Tana. I had seen this bridge in March the year before, during this epic trip with my friend Marci. Conditions were colder and sunnier back then.

This time though, the attraction was the building of a new, wider bridge. Not a bad thing, given how narrow the old bridge is.

Then, I continued north, along the Tana river. That’s a cold story for another day. Stay tuned 😉