January the sixth, first outing out the year. The weather forecast announces a schizophrenic weekend: Saturday will be cloudy and possibly rainy, with temperatures above zero, while Sunday promises to be sunny and coldish, with temperatures dipping below freezing, a little. My plan is the following: Viikki with clouds, Suomenlinna for sunrise.

A week ago, a Black redstart (Phenicurus ochruros) was reported in Viikki, in the reedbed, and has been so since then, every day. This redstart is not very common in Finland, especially in winter, but the Viikki bird is even more special: it belongs to subspecies phoenicuroides, which means it comes from central Asia, somewhere between Mongolia and Iran. That’s a long trip, and not in the right direction for a migrating species.
I want to see that pretty fellow, and then go to Suomenlinna on the day after to enjoy the sun.

On Saturday, I have no reason to hurry, since the weather is so bad. Not much rain on the radar though, fortunately. I leave at 10, and enter the area with no precise direction to the bird. I see some people around, but no gathering. While I’m at the Pornaistenniemi hide, a woman enters, and we start chatting. My Finnish hasn’t improved during my holidays, but I understand that she has seen the redstart that day, and that if I walk to the north, about 400 meters, I will find it. First, I will found people watching it, of course. 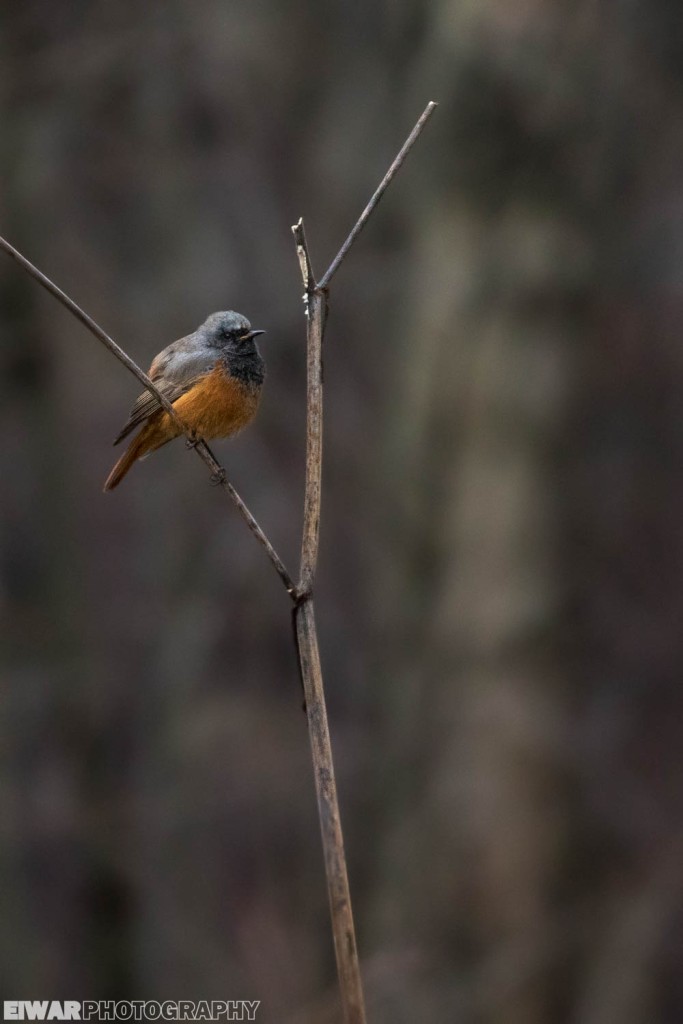 And there it is, in a grove of birches. There are only two men taking pictures, while it forages in the area, sometimes perching on reed blades or low branches. I befriend one of the men, and as more people arrive, I learn that there is a Great grey owl (Strix nebulosa) in the woods nearby! Now that’s not something I expected 😀

Among birders, Finland is famous for its owls, but a few species are still missing from my list: since I arrived, in October 2017, I added the Eurasian eagle-owl (Bubo bubo) and the Ural owl (Strix uralensis), and that’s about it. This Great grey (let’s call it GGO, like the pro), it’s interesting! Mika accepts to take me with him to see it, but first, I try to snap a few shots of the redstart. As you can imagine, the conditions are disastrous: it’s very dark, therefore I need to climb up the ISO scale to expose my pictures adequately… which in turn creates a lot of noise. I make a few pictures, then off we go.

On the way, we talk more: we talk about birds, we talk about Finland, and we talk about photography. My guide and I have the exact same gear, but he knows the fauna much better than I do, and the good spots that come along. You should check Mika’s Instagram page, it’s worth a look -> click!

After parking the car, we walk towards the forest. We see many people coming our way, so we ask. “Have you seen it, is it still there?”. Seems like everyone out that day has binoculars around the neck, and all have seen the owl. We walk faster as we approach, but it has been lost. Mika relocates it quickly, perched atop a dead spruce. I gasp. What a bird! It’s huge, like an eagle-owl, it’s grey, it looks like all the pictures I’ve seen before, except that now it’s me it’s looking at. 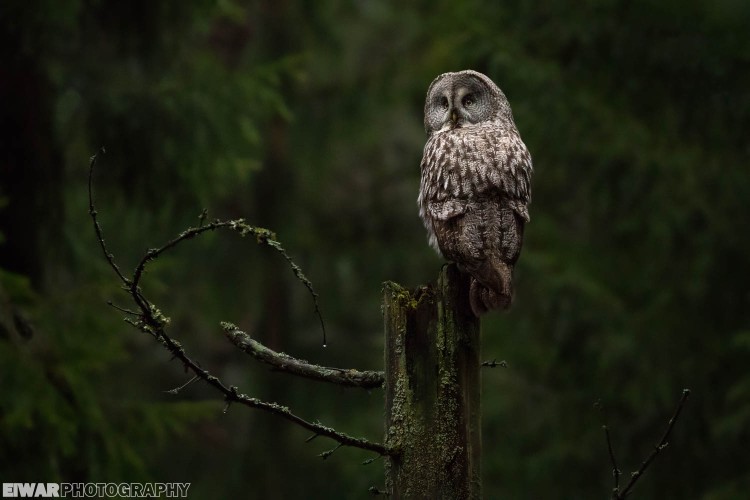 Photographers flock around the tree, but I prefer to savour the moment and leave the bird a bit of breathing space. I gasp again when it takes off. What a wingspan! It’s huge, it’s grey, and it’s silent like an owl as it navigates the maze of a forest it chose to settle in. Incredible.

I’m a bit uncomfortable seeing all those avid photographers getting closer and closer, so I circle around at a distance. I have a vision, a picture in black and white, with a very dark background and the owl standing out in the light. I know that, in these conditions, I will have to underexpose a bit if I don’t want to use ISO 10000. I’m already at ISO 6400, higher than I’ve ever been. Higher than for the eiders. 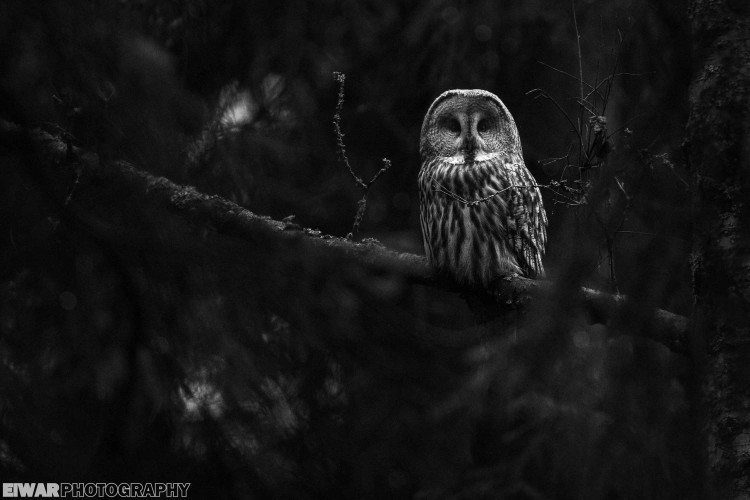 When the owl moves again, it chooses a low perch. What a mistake. The photographers get even closer, use the flash, it’s a circus, I feel sick. It would have made good pictures, but I simply can’t take any in this situation, with the bird so stressed out, jumping at every sound. I can understand the excitement, given that GGOs (we are pro, remember) are not common in Helsinki, but this is disgusting. I keep my distances, and soon the owl goes back to a dead tree. Again the flashes, again I stay further, working on composition. 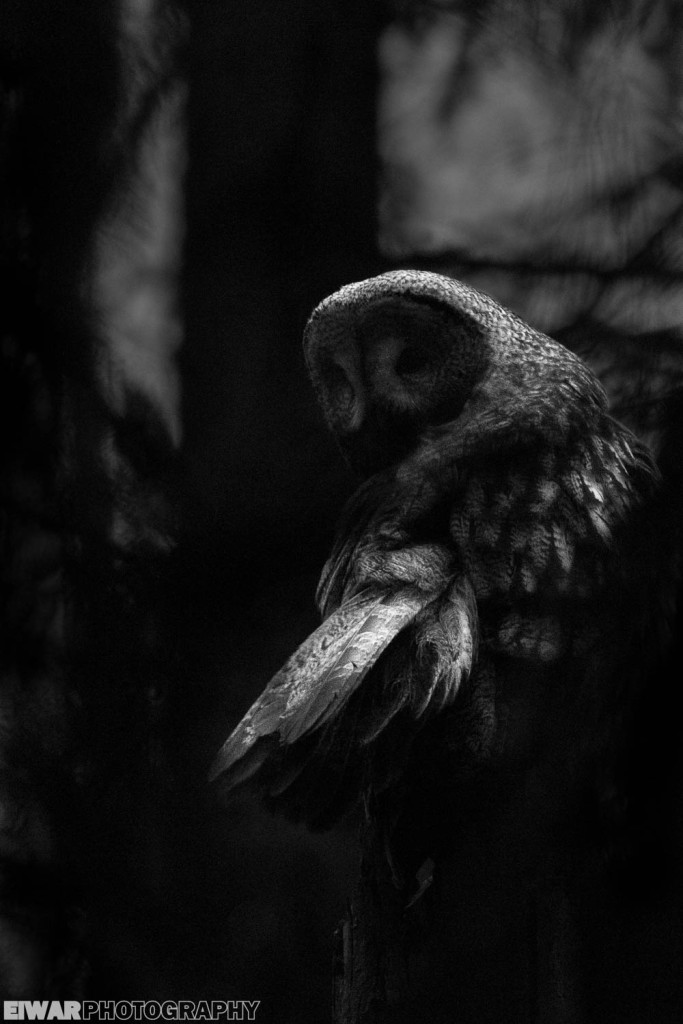 When I left the redstart, I decided I would come back after the trip to Suomenlinna, to get better pictures. It seems hurt, because it opens and closes its beak all the time, but I hope it will be fine.

Sunday morning, Suomenlinna. It’s nice and cold, but the sunrise is not very spectacular. It gets better afterwards, when the warm light meets the warm tone on the façades. 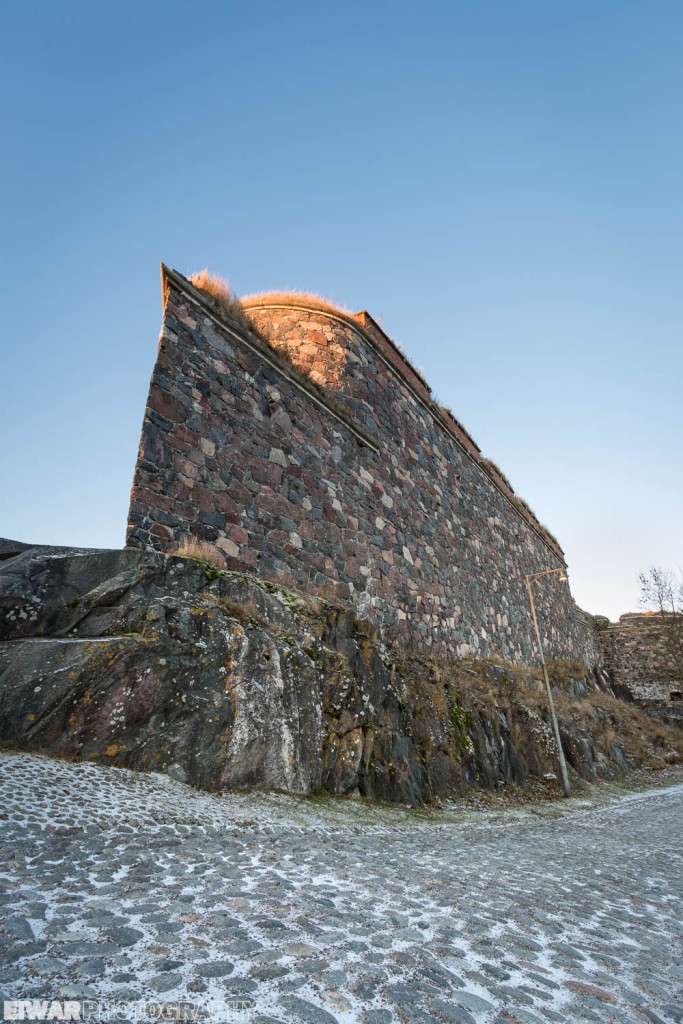 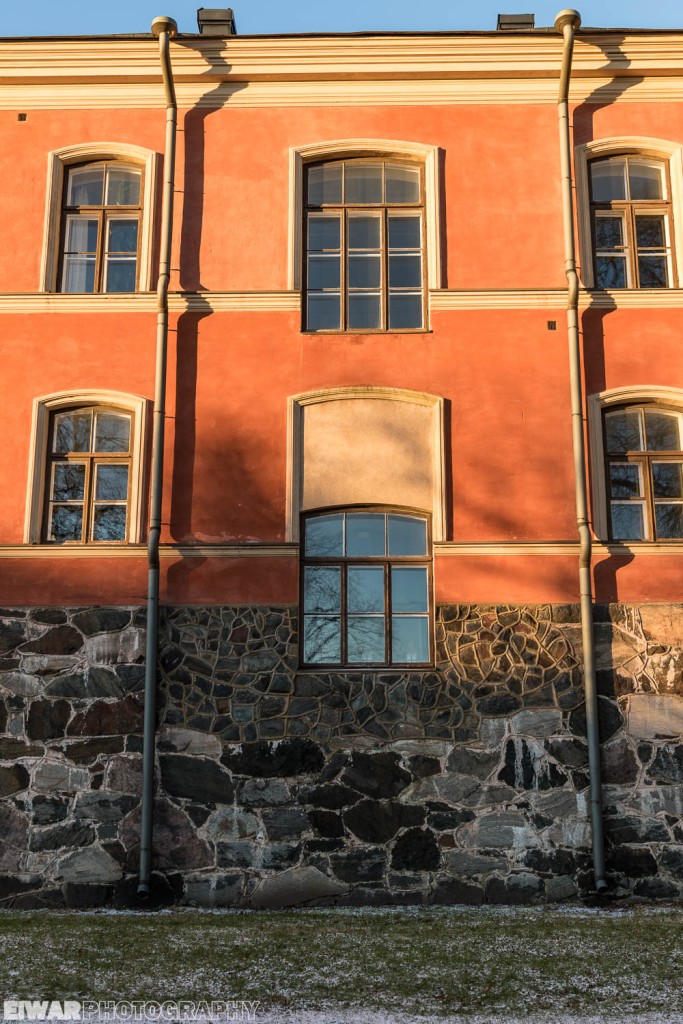 It’s a beautiful place, but my heart lies somewhere else today. Back to Viikki! Warm and rainy, this autumn and early winter have filled the lakes and rivers to the maximum. The flow is powerful at the old power station of Vanhakaupunki (“the old town”, that’s where Helsinki started, before the Russian made it the capital of the Grand Duchy of Finland), and the flying current freezes on the bridge, on a spectacular but slippery display. 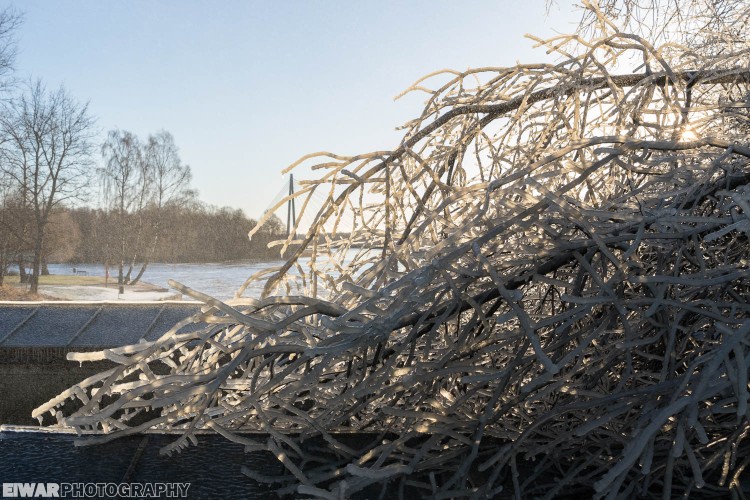 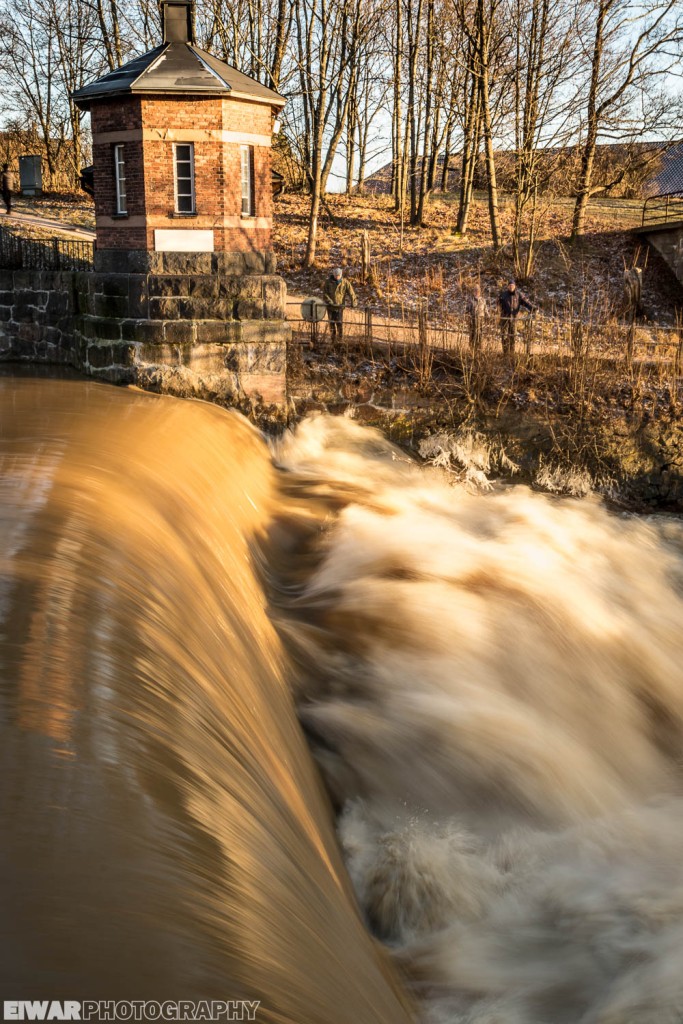 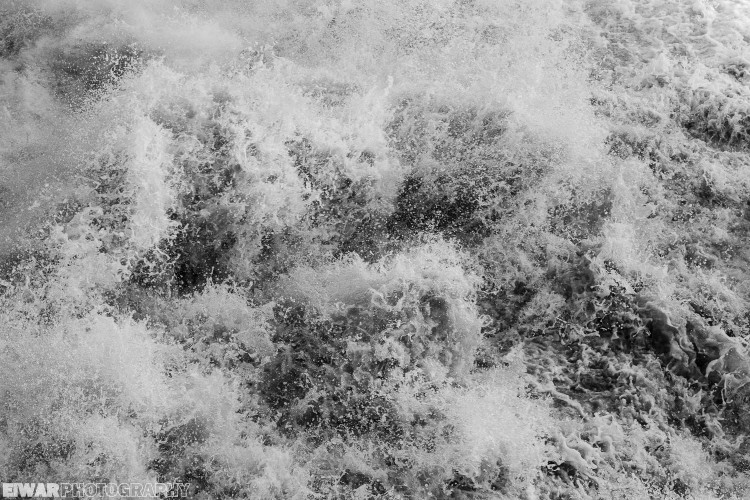 I still want to see the Black redstart. When I arrive on the small path, I’m happy to see that the mud, forged by the many observers trampling the area, is now frozen. The little bird has moved a bit, but has become even more confident with humans, feeding at their feet. Sweet 🙂 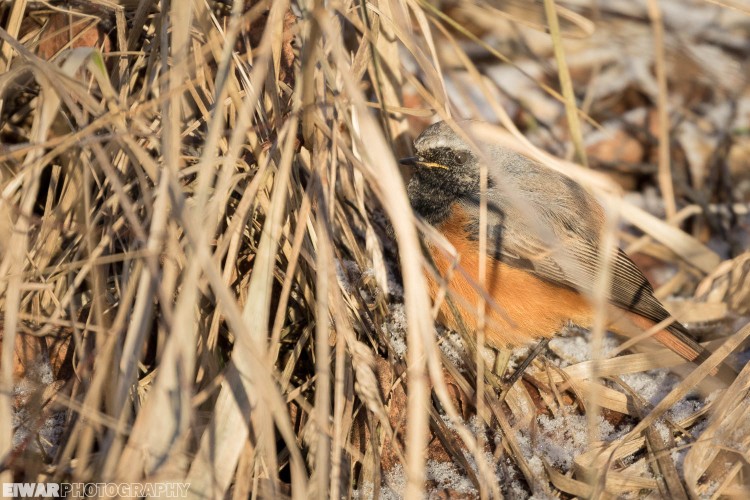 I lie in the snow and shoot some frames of that stunning bugger. When it disappear, so do I. I’m weary but happy. 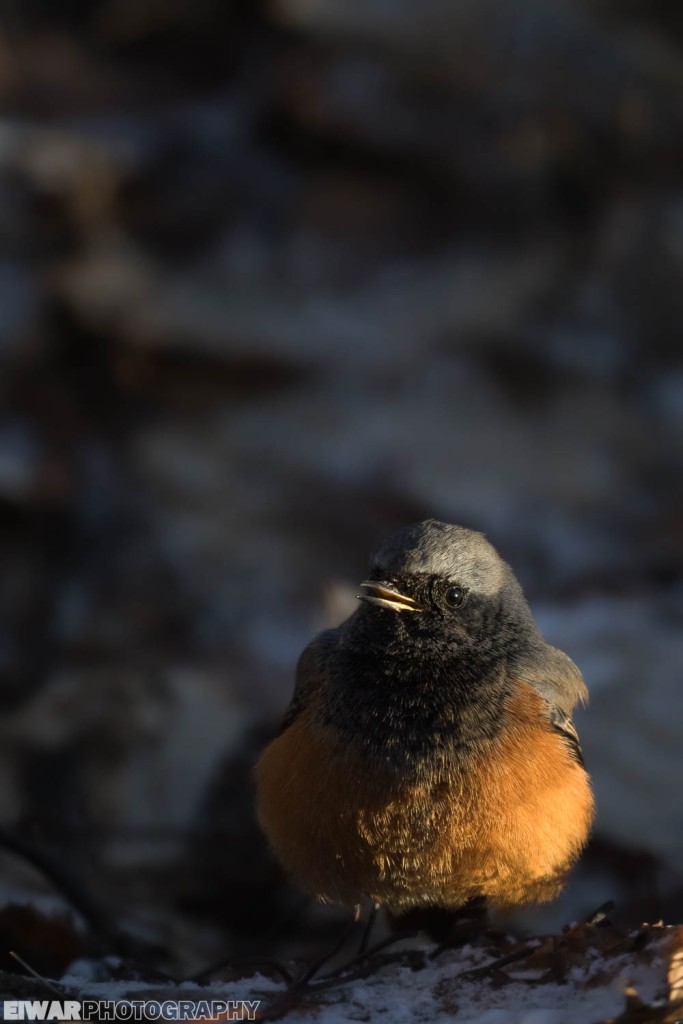 Did you like this piece? It’s a way of writing very different from what I’m used to, so please let me know what you think of it 🙂

You’re also very welcome to follow me on Facebook, for early pictures of my adventures, and old ones too 😉 -> Samuel Bloch – Eiwar Photography 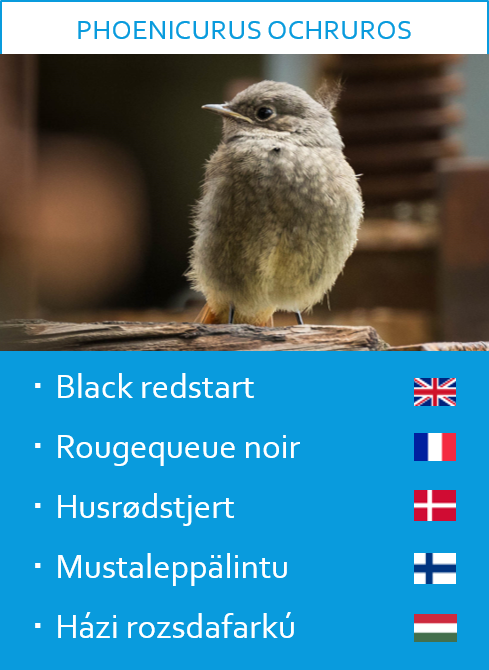 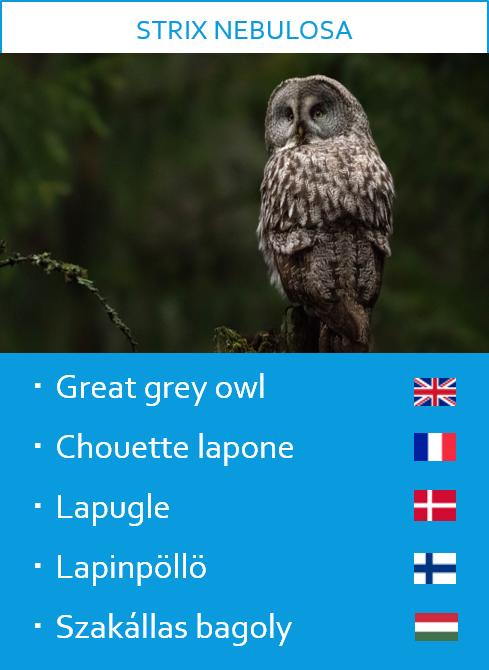 32 thoughts on “Expect the unexpected”