Hanko, a small and isolated town, is located at the southernmost point of mainland Finland. When we told our colleagues that we would go there in winter, Miguel and I saw bemused expressions on their faces: “Hanko, now?”, “There nothing to do in Hanko in winter”… Not something to scare us, of course. I’m quite amused when I do something people wouldn’t even consider, even more so when I enjoy it!

Miguel had downloaded an app for geocaching, so immediately after leaving the train, we began our quest, and found a capsule in a tree, where we wrote our names. Alas, after finding a second one next to the water tower, our other targets remained invisible. Now, though, we can say we have done geocaching. 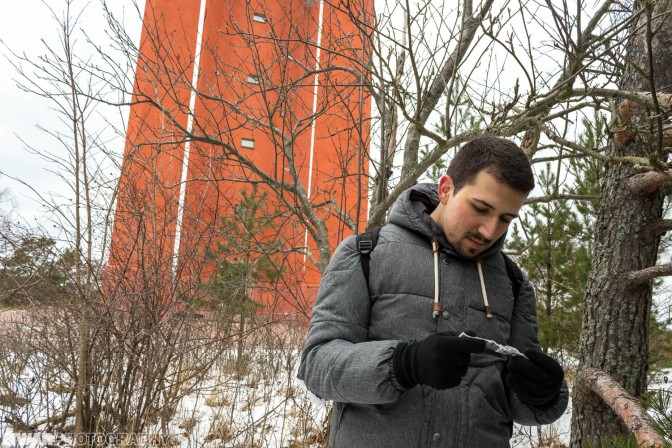 We crossed the quiet town and reached the sea near the casino. There, a strange scenery was offered to us: the sea was frozen, but not quite. Large discs of ice floated on a mixture of liquid water and melting ice barely disturbed by waves coming from the open sea.

In the middle, there was this strange block of concrete, a few arm spans from the shore. So far, two friends have told me they saw in it an alien spacecraft rising from the water: what do you see?

Because of its strategic position, Hanko has always been a prized position for the military; Swedes and Russians have alternately built fortifications on the peninsula. In the forest, we discovered a small bunker in which we could actually go. I don’t know which era it dates back. 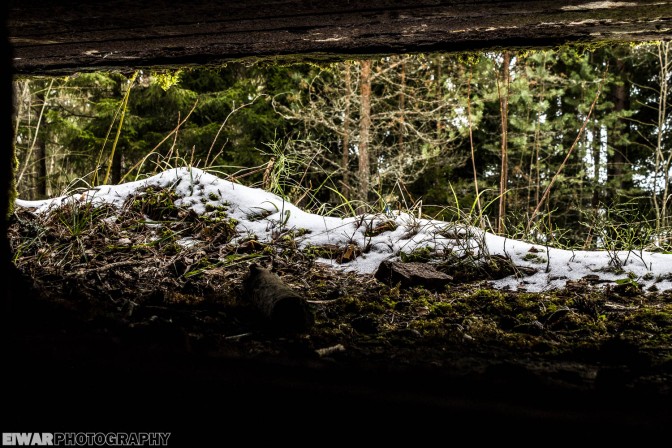 Nearby, a sheltered cove was this time completely frozen. We couldn’t contain our enthusiasm at seeing the sea like this, so we walked on the ice. The grip was rather limited, and we had no idea how solid the ice was, so I played it safe and stayed near the shore, but my friend enjoyed it to the fullest, endlessly sliding on the pristine surface. 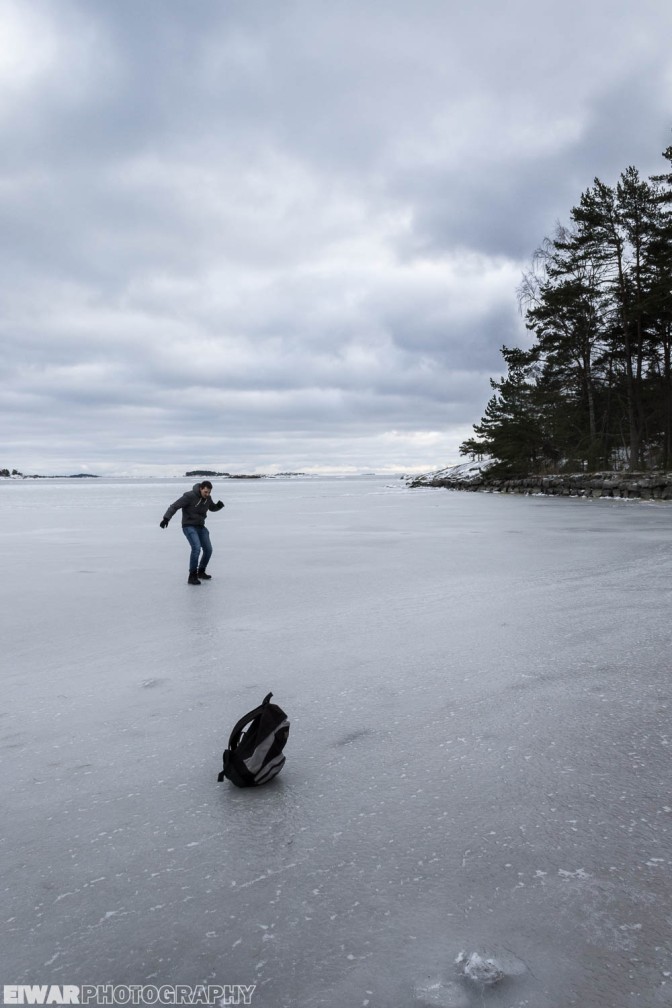 After this feat of amusement, it was time to move towards our main goal: the southermost point of mainland Finland, at the tip of the peninsula. We passed by a harbour, then a second one, with brand new cars lined up on huge parking lots. I think Hanko is the main entrance gate for vehicle imports to Finland.

The last three kilometers take you along the beach, then in the forest, to finally lead you to the end of the world, on a rocky shore battered by the winds. There, we saw two magnificent White-tailed eagles (Haliaeetus albicilla) flying around.

While we were buried under clouds for the whole duration of our trip, there was always light over the horizon, bringing us some hope and interesting light conditions. I combined it with the algae covering the rocks to accentuate the color contrast between the green, more of a symbol from spring or summer, and the white from the snow. When I looked north, the warm-colored rock provided the background for this unlikely encounter.

The sea on the western side of the peninsula was esssentially open, and that attracted hundreds of swans. They gathered out of human reach, but some of them came to feed along the shoreline. Initially, I was intrigued, because I could hear them. For Mute swans (Cygnus olor), they were particularly vocal… until I took a closer look and realized there were actually quite a lot of Whooper swans (Cygnus cygnus) in the lot! Those were the ones whooping and bullying their silent fellows.

If you remember this article from last August, you probably know that, among the two species, the Whooper is the aggressive one. I had the demonstration before my eyes, when a pair loudly took off, flew along the coast and landed in the middle of a group of Mute swans, effectively scattering them, before displaying for a while.

After this show, we had to hurry to catch the train, but once again we made it in time, and even had sauna in the evening.

10 thoughts on “White wings of Hanko”