2017 will see Finland celebrate its 100th birthday, and to start the year, many events were organized in Helsinki on New Year’s Eve. Among those, one looked particularly appealing: a free visit to Finlandia-talo, a congress and event venue designed by the maestro himself: Alvar Aalto, maybe the most famous Finn in history. I didn’t know that visits were organized regularly, so it seemed like a unique opportunity, and I was really happy when the woman at the desk added a line for me, even though the visitor list was supposed to be already full. I’m not going to give you a historical overview of the building; instead, I’ll show some visual details and tell some anecdotes that our friendly guide showed us.

Every detail of the building, down to furniture and lamps, was designed by Aalto or his wife Elissa. The later are works of art by themselves, and come in all shapes and styles. A delight for the eye.

Finlandia-talo hosted Stage III of the Helsinki Process, the founding act of the Organization for Security and Co-operation in Europe. During the Cold War, after two years of talks in Geneva, 35 states signed the Helsinki Final Act on August 1, 1975, a major step towards reducing tensions in Europe. Many world leaders came to Helsinki for the occasion, among them US’s Gerald Ford, USSR’s Leonid Brezhnev and France’s Valéry Giscard d’Estaing. Inside the building, next to the auditorium, is a commemorative plaque with all those names.

The main auditorium is a wonderful piece of architecture. There, the white Carrara marble used everywhere else inside and outside the building is combined with Oregon pine panels painted blue, a subtle reminder of the Finnish flag and a relaxing association.

Alvar Aalto was stubborn, and when he designed this room, he insisted on giving the acoustics job to his nephew (or son, I don’t remember), whose skills were… dubious. The result was a terrible sound quality, and the first concert was a failure. Aalto had to let someone else take care of the room’s sound.

Since New Year’s Eve, the facade of Finlandia-talo is lit up white and blue, a reminder of the anniversary to come. It’s going to be a great year for Finland, and I’m glad I can attend. 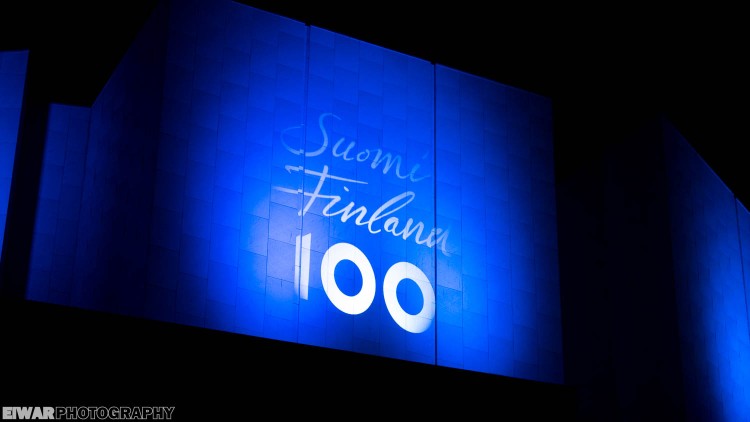 6 thoughts on “Details of Finlandia-talo”