In a previous article, I showcased the literal highlights of our trip to Lapland: the fells of Pallas-Yllästunturi National Park (don’t call them mountains). However, there’s something I’ve held back intentionally: the valleys, the lowlands, the places where trees grow! This is what the present post is about.

When we left Rovaniemi on our way to the park, we were not very optimistic. Sure, the forest around was beautiful, some trees were already turning orange or yellow, and lakes and rivers appeared there and then, but the weather forecast for our arrival to Hetta was crappy: rain, rain, pouring rain for the exact moment we were supposed to leave the bus, around 10pm. Until Muonio, I hoped, but the last stretch of the drive was really humid, and to be honest, rather stressful. The plan was to set the tent next to the Visitor Center, but to do so under the rain, on a soaked ground, was not a really appealing prospect.

We got lucky. It was only raining lightly when we arrived, and we spotted a shelter that could do the trick for the night. It was not dark yet, so we climbed up the hill (~100m); the path was more of a mire than an actual path (first wet feet of the trip, not the last ones), but we discovered a nice view and a wood teepee with one side open. We were relieved, and even though it started to rain hard after that, we had a roof over our heads. An Estonian girl and a German guy, who had come by the same bus, chose not to share our abode and set up their tent under the rain, but they seemed to fare well. We feared humidity, so we set up our tent… inside the shelter. Yes, we did just that! Here is what it looked like the day after. 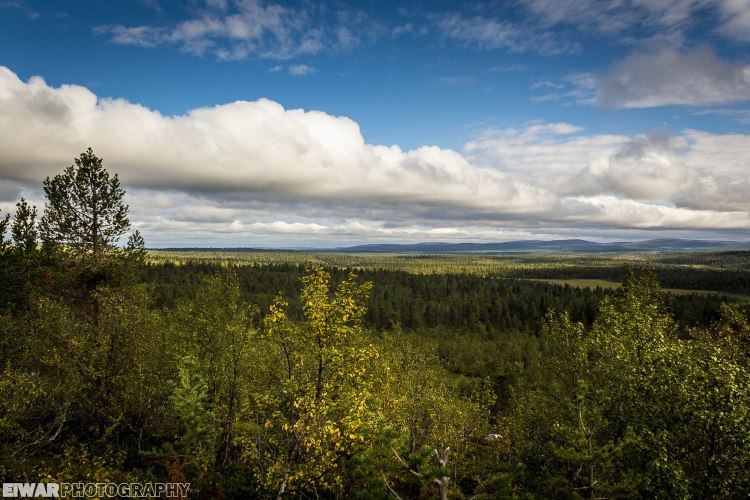 On Saturday, we went to the Visitor Center, were confirmed that a 30-year-old map would be good enough for the trip (thanks Mom. thanks Dad!), were told that we had nothing to fear from bears if we were ever to camp, and set sail to the village, to find a boat that would take us to the other side of lake Ounasjärvi. We met our friends from the bus, crossed with them, and off we went! 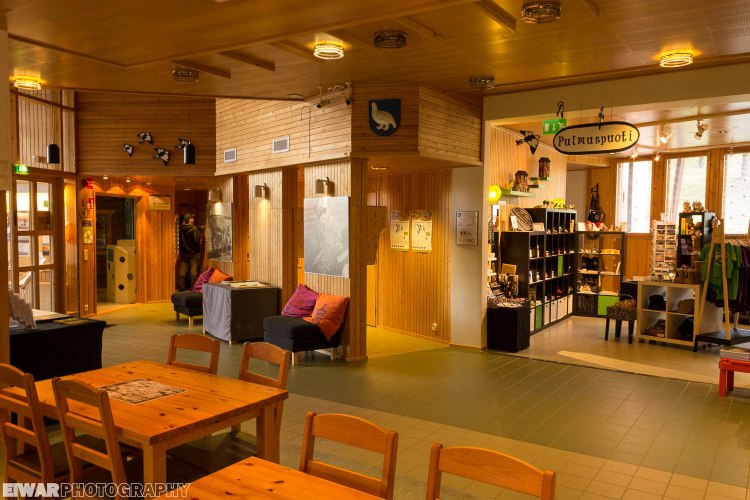 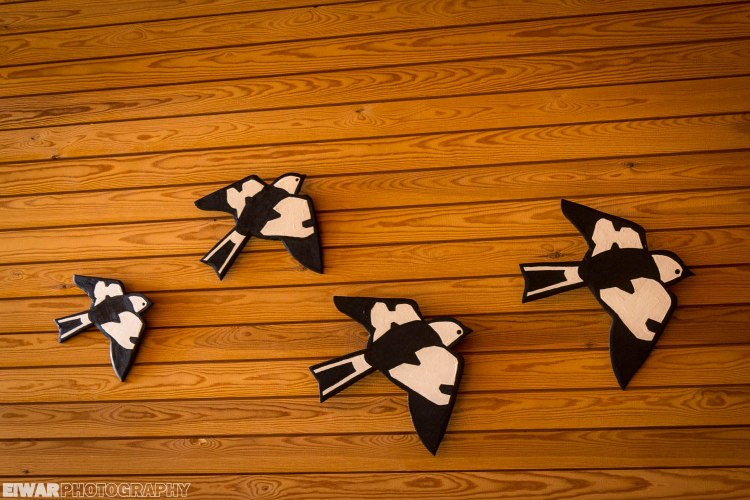 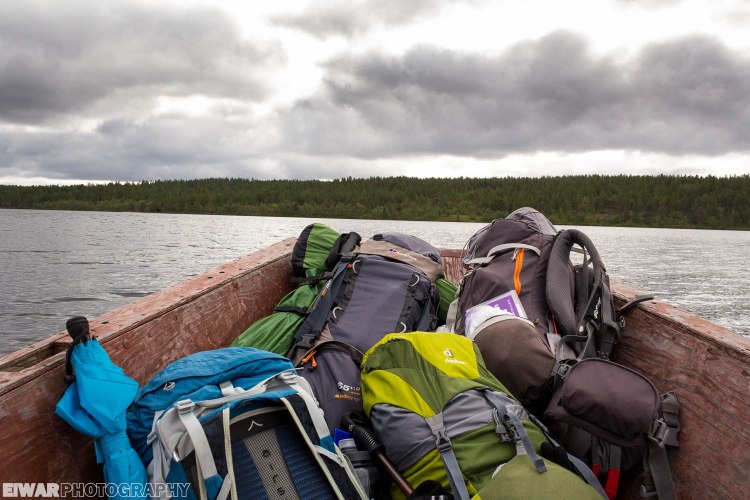 The first ramps, in the forect, were gentle, and in the first hour, we disturbed two groups of Western capercaillies (Tetrao urogallus). Though we only saw females (and maybe younglings), and briefly, it was a lifer for me! 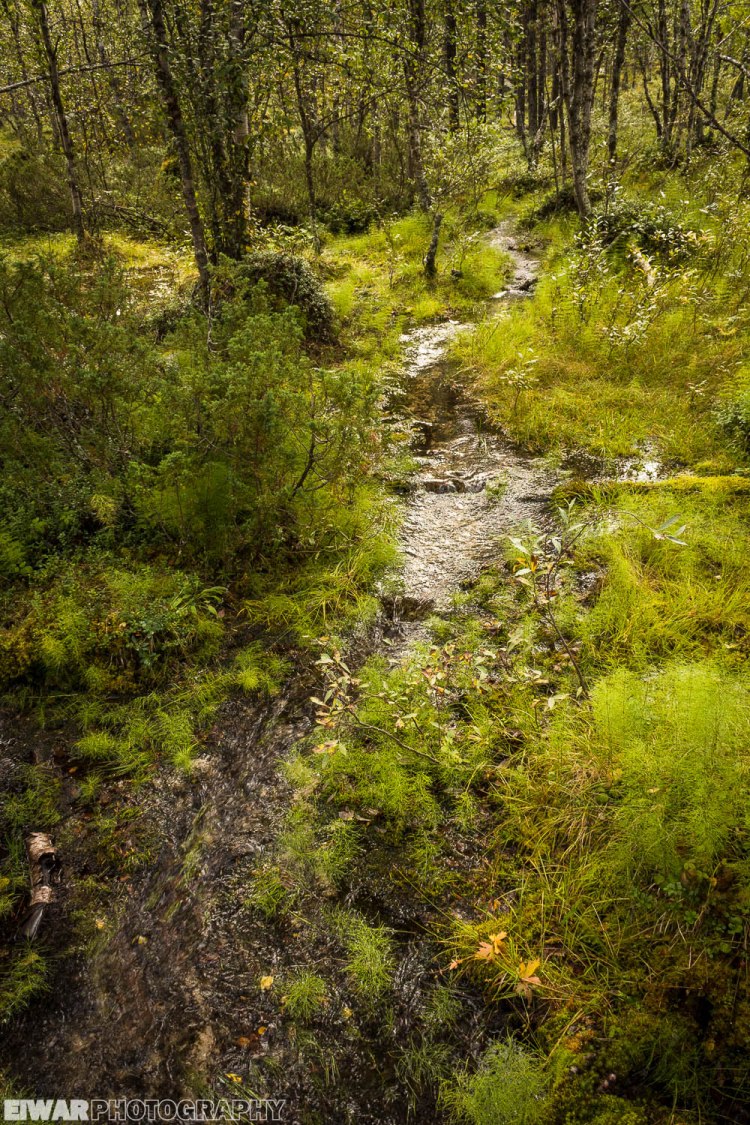 We passed by marshes, ponds and blueberry fields, saw a herd of reindeers, and got to Pyhäkero (the cabin/camp site) for lunch. There, we were greeted by my second and last lifer of the trip, Grey-capped chickadee (Poecile cinctus). After lunch, I tried to relocate them for a photo shoot, but they were nowhere to be seen.

After Pyhäkero, we ascended to Pyhäkero (the fell). It was funny to see the forest gradually thinning out, to finally give up and abandon the top of the hills to moss, lichen and other kinds of low vegetation. On the other side of the fell, we found our shelter for the night, Sioskuru. After several hours in the wind, it was a pleasure to actually find lush vegetation growing around the fast-flowing river. It felt like a little patch of paradise, and it was very relaxing. The sunrise was also gorgeous in the valley. 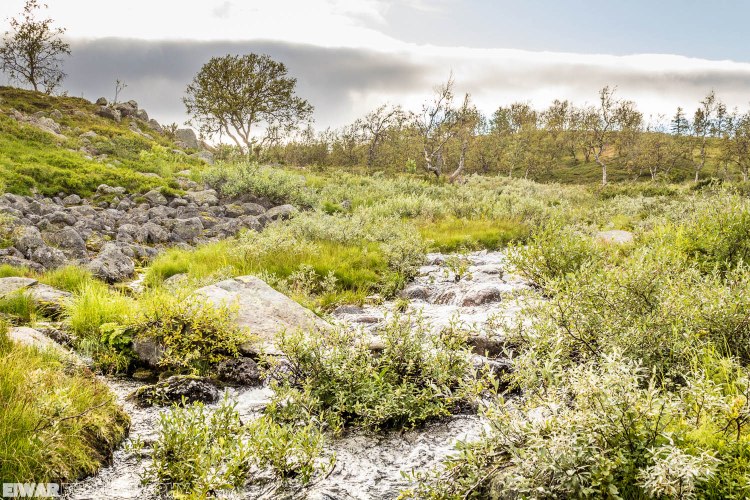 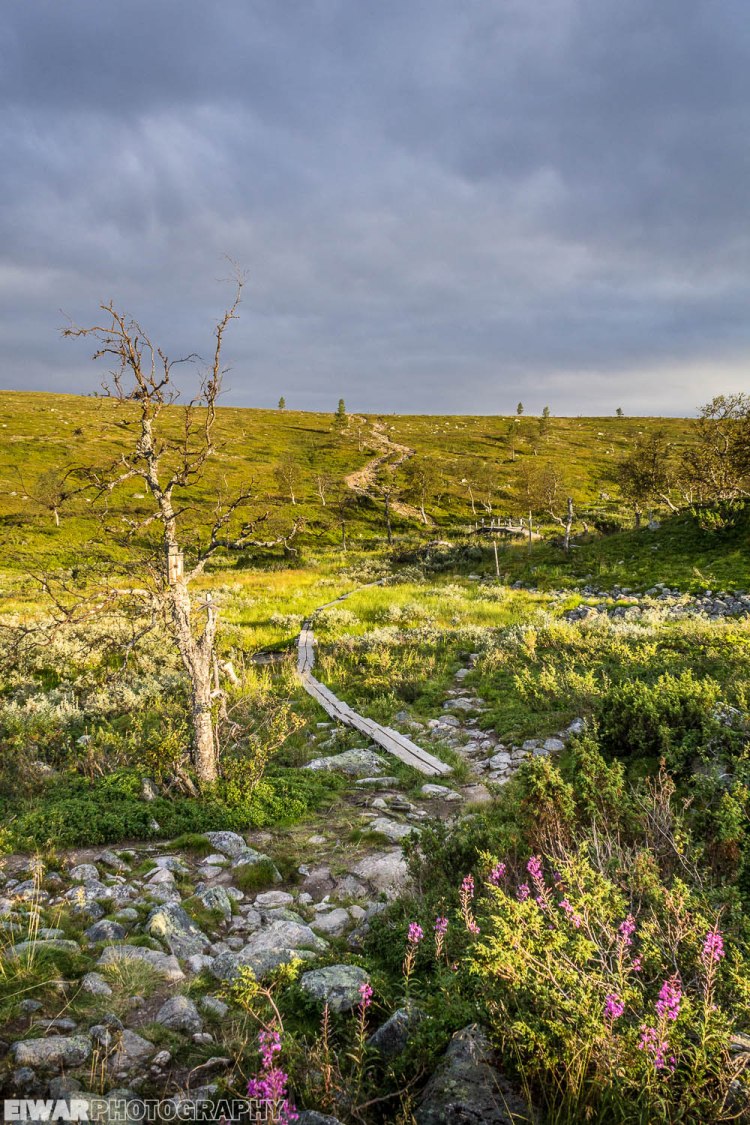 This scenario repeated itself on Sunday: we crossed rugged landscapes all day, but Hannukuru, nested in a flat valley between the two fell ranges, was an oasis of greenness. I tried to take a bath in the lake, but it was so cold I couldn’t get into the water; it felt as if my legs were seized, it hurt so much I didn’t pursue the experience, even after two more attempts. Instead, I settled for a shower.

Our third stop, Nammalakuru, did not show the same configuration, but at the end of the trip, in Pallas, we slept in the forest again. 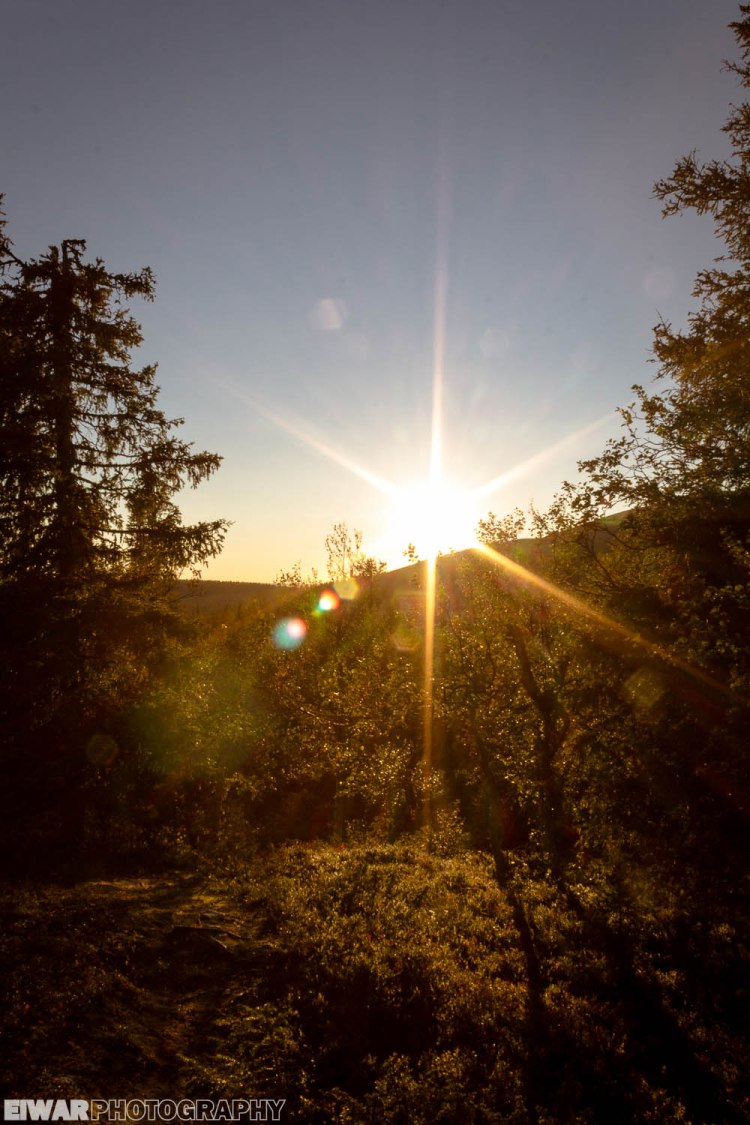 The morning bus crossed semmingly endless wood areas before arriving to Kittilä. There, we had three hours to wait, so we bought a pick-nick, enjoyed it in the grass (the weather was sunny and warm), and then I strolled next to the river. I saw one last flock of Common cranes (Grus grus), a few Eurasian siskins (Spinus spinus), and some trees slowly dressing into their autumn jacket. I produced the only bird shot of the trip (sadness ;_;), a tame White wagtail (Motacilla alba) hunting insects around an abandoned house. 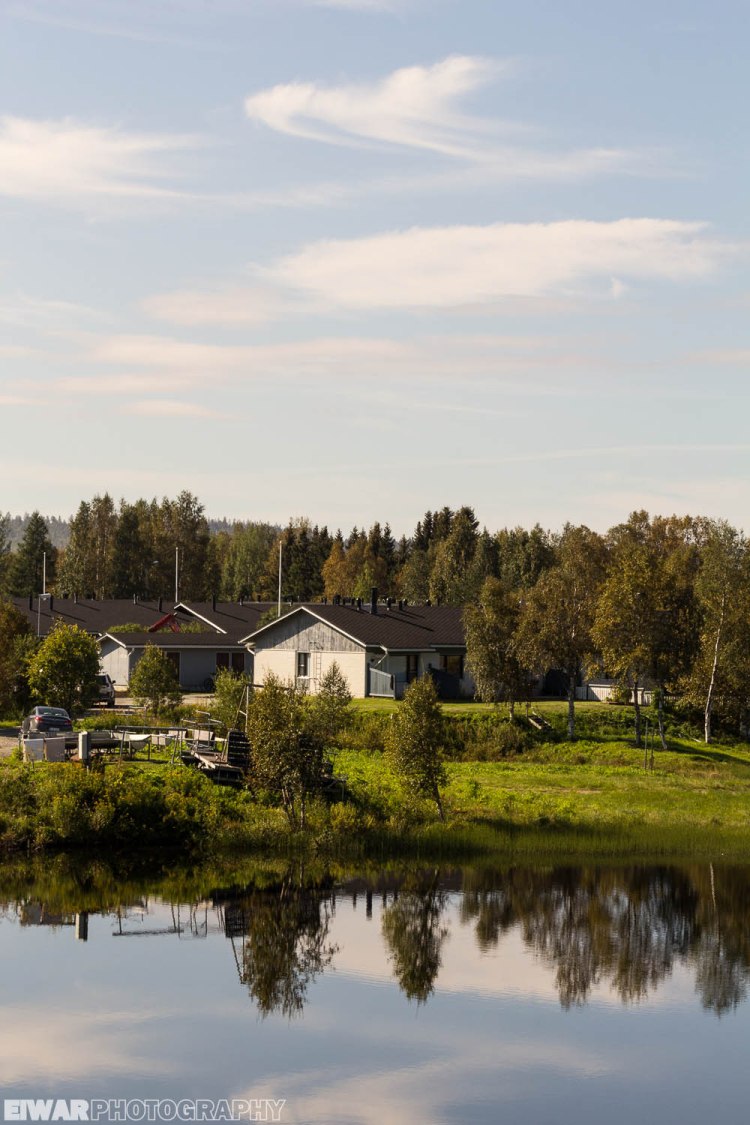 The bus brought us back to cloudy Rovaniemi, where we saw the Lordi square (with handprints of the winners of Eurovision 2006) and ate a pizza, before an horribly long overnight train trip back to Helsinki.

22 thoughts on “Valleys of the north”